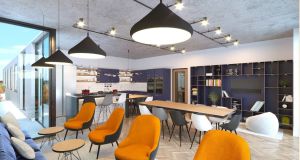 Architect’s image of a kitchen in a Bartra co-living scheme .

Property firm, Bartra Capital has secured planning permission for a €25 million co-living scheme for a site on Merrion Road in Dublin 4 despite strong local opposition

However, Dublin City Council has included a condition that requires the omission of 18 bed spaces contained in 12 single and double bedrooms after finding that the communal spaces in the scheme were inadequate. This reduced the number of bed spaces to 93.

The council planner’s report described the level of communal space as “unacceptable” for the scheme stating that it would lead to “substandard accommodation” for the residents.

The council said that the omission of the rooms provides for an additional 204sq m in communal space .

The council said that the shared living scheme is the first such proposed for the D4 area, and “has a large number of employers within walking and cycling distance and with good transport links and as such complies with the requirements for a shared living scheme”.

The Bartra Capital plan attracted 38 objections including ones from former ceo of Aryzta, Kevin Toland and his wife Aisling, who like other objectors such as Senator Ivana Bacik (Lab), had expressed Covid-19 fears over the shared living plan.

In their objection, the Tolands who live on Merrion Road,  told the Council “Covid 19 has struck every country in the world, the very nature of co-living would have the potential of spreading the virus even further. It could endanger the local community at large.”

Others to weigh in with objections against the plan include the Shrewsbury Rd Residential and Environmental Protection Association (SRREPA), Dublin Green MEP, Ciaran Cuffe and Chris Andrews TD (SF).

Senator Bacik said on Tuesday that she was “disappointed” with the decision “particularly in light of the announcement by Minister for Housing, Darragh O’Brien that he intends to restrict future co-living development”.

“Co-living developments are not suitable as a way of resolving the housing crisis even in normal times; and even more unsuitable during the Covid-19 crisis, as communal living with shared facilities makes social distancing impossible,” she said,

Planning consultants for Bartra told the council in October that assuming a grant of permission, it will be three years before the building is ready for occupation and “at that juncture, we are very hopeful that Covid-19 will not be a relevant factor in the day to day operation of the building”.

Consultant occupational & environmental physician Martin Hogan drew up a Covid-19 risk assessment on behalf of Bartra and said that the degree of thought put into Covid 19 controls in the scheme “is excellent and exceeds anything I have seen before in a residential setting”.

Richard Barrett’s Bartra is to invest €130 million constructing planned four shared co-living sites in the capital and the Merrion Rd scheme is the third to secure planning.

Bartra Capital has also secured planning for projects at Dún Laoghaire, Rathmines while a fourth planned for Castleknock is before An Bord Pleanala.

A spokeswoman for Bartra Capital declined to comment on Tuesday on the decision.