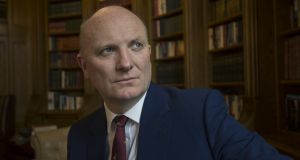 AIB is ramping up preparations for its latest sale of toxic debt, code-naming the process Project Alder, with sources suggesting the value of the loans to be sold is set to top €1 billion. Jack Horgan Jones quotes market sources as saying the bank is expected to bring the loan book to market later this year, with a deal expected to close before the end of the year.

Galway businessman Declan Ganley’s Rivada Networks is behind a plan for the US telecoms sector that is being promoted by former White House deputy chief of staff Karl Rove. Colm Keena reports on how, against a backdrop of White House moves to restrict the influence of Huawei, the Rivada proposal involves the use of bandwidth currently controlled by the US department of defence to provide “wholesale” access to 5G.

Huawei has said it will be able to roll out its own mobile phone operating system “very quickly” if its smartphones are cut off from Google’s Android software, after the Chinese tech giant was placed on a “banned entity” list by the White House, which forbids US companies to supply it with technology. Still, Huawei owners seem largely unsure what the Google announcement might mean for the security and functionality of their devices in the long run.

In the wider economic context, Hong Kong’s political leader Carrie Lam told Irish business leaders on Monday she is “worried” about the short-term impact of the US-China trade war on the territory’s economy. However, she predicted that strong growth would return in the long term as it pivots towards trading more heavily with other Asian countries.

In better news for the tech sector, Kildare Co Council has given the green light to plans byIntel for its planned $4 billion manufacturing fabrication facility in Leixlip, although the decision is likely to be appealed to An Bord Pleanála by objectors. .

Today’s Cantillon column notes that agriculture seems to have a seat at every political table, not just the top table. Tourism, on the other hand, is far less embedded in the European body politic, despite rivalling and arguably exceeding agriculture in economic importance. In Cantillon’s view, it’s time for tourism’s representatives to get as cranky as the farm lobby.

In our personal finance coverage, Fiona Reddan asks whether you are mad to keep money in prize bonds. “Winning is a long shot and the prize pool is shrinking, but its popularity remains undimmed,” she writes. Meanwhile, Prionsias O’Mahony outlines the six steps in a fund manager’s toolkit which can offset market data that “lures us into errors of judgment”.