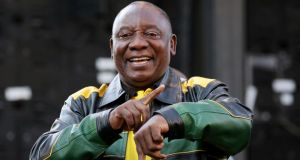 South African president Cyril Ramaphosa: ‘We’ll be seeking to get people, men and women, who have great competence and capabilities to serve the needs of the people of South Africa.’ Photograph: Mike Hutchings/Reuters

South Africa’s president Cyril Ramaphosa has told investors his new cabinet will be restructured to kick-start the country’s stalled economy, and that it would continue the job of reforming state-owned enterprises.

Addressing his first investor conference since the African National Congress (ANC) party retained power with a reduced majority in last week’s general election, Mr Ramaphosa maintained only people fit for purpose would be appointed to his executive, which he will unveil on May 28th.

“We’ll be seeking to get people, men and women, who have great competence and capabilities to serve the needs of the people of South Africa,” Mr Ramaphosa told guests at the Goldman Sachs investor conference in Johannesburg on Wednesday.

He added: “We have to embark on the reforms, speed up on them . . . We are going to ensure that the certainty that investors want is there”.

The president’s assurances come shortly after the release of South Africa’s latest quarterly labour force survey, which shows unemployment rate has risen to 27.6 per cent in the first three months of his year, compared to 27.1 per cent in the last quarter of 2018.

Although he would not be drawn on who will make the cut in his new cabinet, analysts expect it to be significantly reduced in size from the 34 ministries he inherited in February 2018 from his predecessor, the scandal-prone Jacob Zuma, who was recalled from office.

The make-up of the new cabinet is keenly awaited by investors and the public, as it will provide them with a good indication of Mr Ramaphosa’s grip on the ruling party following an election in which it recorded its worst ever parliamentary result.

The trade-unionist-turned-businessman added the government would continue to reform the state-owned enterprises that were crippled during the Zuma era, particularly Eskom. The embattled state-owned power utility is currently 400-billion-rand (€25 billion) in debt.

“If Eskom fails this country also fails,” he said, “It is a valued national asset and we are not privatising Eskom, we are restructuring it so we can allow the private sector to be our partners”.

He also insisted his government wanted to work with the private sector to help boost the economy and create jobs.

“The ruling party has embraced the notion of the value of inviting the private sector to be our partner. Our [elective] conference in 2017 was very clear that we should build a social compact with the private sector, labour and communities,” he said.