Huawei can roll out own mobile operating system ‘very quickly’ 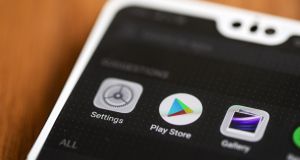 Huawei, which uses Microsoft’s Windows on its laptops and tablets, has long sought to develop its own operating systems. Photograph: Justin Chin/Bloomberg

Huawei has said it will be able to roll out its own mobile phone operating system “very quickly” if its smartphones are cut off from Google’s Android software.

The world’s second-largest smartphone maker is facing the prospect of being shut out of the world’s most popular smartphone operating system after being placed on a “banned entity” list by the White House, which forbids US companies to supply it with technology.

Huawei, which last year sold 200 million phones, promised its customers that their current phones would continue to work, and have access to Google’s Play Store to buy apps. These phones are certified so that Google can provide them with updates and downloads without going through Huawei.

But Tim Watkins, Huawei’s vice-president for western Europe, warned: “The future is not so certain.” Huawei has cast itself as the victim of the ongoing trade war between the US and China, and Mr Watkins said the company was “caught in the middle”.

He said the group had been preparing for the worst, after becoming a target for the US last year, and that it had been working on its own operating system, which “can kick in very quickly”. He noted that the operating system has been trialled in some parts of China.

Huawei, which uses Microsoft’s Windows on its laptops and tablets, has long sought to develop its own operating systems. In an interview with Germany’s Die Welt newspaper, and subsequently confirmed by Huawei, Richard Yu, chief executive of the consumer division, said the company would “be prepared” in the event of any blacklisting.

“That’s our plan B. But of course we prefer to work with the ecosystems of Google and Microsoft,” he told the German publication in March. Microsoft declined to comment.

Huawei also relies on silicon chips made by US companies including Qualcomm and Intel and Mr Watkins said the company has stockpiled five years of spare parts for its phones and one year’s worth of components.

In a research note to clients, Citi analysts said the potential software ban “could paralyse Huawei’s smartphone and equipment business”.

Google said on Monday that it would comply with the orders from the White House and was “reviewing the implications”.

If Google blocks Huawei from Android, which is used on nearly three-quarters of the world’s mobile phones and offers more than 2.5 million apps, the Chinese company will still be able to use the basic, open-source version of the software.

But its future smartphones may lose access to apps including YouTube, Gmail and Maps, and to the Google Play store and to security updates. This is likely to have a severe effect on their attractiveness to consumers outside of China, where many Google apps are already banned.

Huawei does not break out its smartphones business but it said last year that the consumer business contributed 48 per cent of company revenue. Richard Windsor, an independent analyst, said losing the Google ecosystem “is very likely to cost Huawei all of its smartphone shipments outside China” – which, according to data consultancies including Counterpoint Research, is about half its total.

The repercussions from the White House ban continued to hit technology stocks in Europe on Monday after reports that the world’s biggest chipmakers, including Qualcomm, Broadcom, Intel and Infineon, were planning to stop supplying Huawei.

The Stoxx index tracking Europe’s tech sector was on course for its biggest single-session decline since February. It fell 2.4 per cent, outrunning a decline of 0.3 per cent for the wider Stoxx 600. – Copyright The Financial Times Limited 2019

1 Why are markets booming when a crash is on the way?
2 Could your old car be giving away all your secrets to its new owner?
3 Permission sought for €150m film and media campus in Wicklow
4 Dunnes Stores trials online ordering from Cornelscourt outlet
5 Vodafone to speed up 5G rollout using new technology
Real news has value SUBSCRIBE