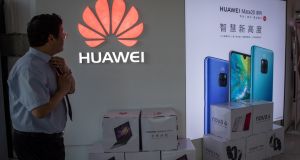 Huawei: the Chinese company was added to a trade blacklist by US president Donald Trump, making it extremely difficult for it to do business with US counterparts. Photograph: Roman Pilipey/EPA

An estimated 11 per cent of the new smartphones sold in Ireland in the 12 months to April were made by China’s Huawei and based on the Android operating system owned by Google, according to Statcounter. Globally, Huawei had nearly 19 per cent of the smartphone market in the first quarter of this year, according to Canalys, making it the second-biggest seller behind Samsung.

So it was no surprise that the call centres and social media accounts of networks lit up on Monday morning after Google warned overnight that it would comply with the Trump administration’s decision to stop Huawei using Android for new phones.

Google was quick to clarify that Google Play, its app store, and Google Play Protect, its smartphone security software, would continue to function for people that already own a Huawei smartphone or tablet built on Android. So current users are unaffected.

But it is unclear how the situation will unfold. Huawei said it would not be barred from basic updates to the Android open-source software as a result of the move. But if it is barred from working with Android on more advanced development and Google’s apps and services are not available for new Huawei phones, the appeal of its devices will fade rapidly as it is forced to turn to in-house alternatives.

The real damage caused by Google’s move will be on sales. 5G is on the cusp of launch in markets such as the UK and Huawei’s phones are at the centre of that push. The reassurance provided to “existing” users may not be enough to overcome consumer alarm when they want to upgrade.

Industry expert Tristan Rayner, senior editor with the Android Authority news website, said the block means security updates to Huawei phones from Google will stop, and, as a result, future devices may lack the reliability of other Android phones.

“Future Huawei devices will be significantly affected. We now know that future devices cannot be loaded with the Google Play Store, or those Google apps like Gmail or Google Maps,” he said.

“Play Services will also not be available, which is a core set of features responsible for many underlying operations on modern Android devices. That makes buying a Huawei phone today a real risk.”

He warned that current Huawei device owners could also face some issues.

“Existing Huawei device owners will be significantly impacted,” he said.

“Whether it’s someone with a brand new Huawei P30 Pro, which was unveiled last month, or the owner of an older Huawei Mate device that’s a few years old, it’s now clear that their Android operating system will no longer receive important security updates.”

Huawei said on Monday it would continue to provide security updates and services for its smartphones and tablets. But it did not say what would happen with phones it would sell in the future, which are unlikely to have access to Google’s popular services including gmail, YouTube and Chrome unless a special licence is obtained.

“Huawei will continue to provide security updates and after-sales services to all existing Huawei and Honor smartphone and tablet products, covering those that have been sold and that are still in stock globally,” a Huawei spokesman said by email. “We will continue to build a safe and sustainable software ecosystem, in order to provide the best experience for all users globally,” said Huawei, which is the world’s second-biggest smartphone maker after Samsung and aspires to the top position.

Huawei’s devices in its home market do not have Google apps, but the move will hugely damage the brand’s appeal to consumers outside China. Almost half of the 208 million phones Huawei shipped in 2018 went to outside mainland China, and Europe is the most important overseas market where its devices currently have 29 per cent market share, according to technology research firm IDC.

Google said it would enact restrictions on Android updates to Huawei after the US president Donald Trump on Thursday added the Chinese company to a trade blacklist, making it extremely difficult for it to do business with US counterparts. “We are complying with the order and reviewing the implications,” a Google spokesman said. According to one source in the tech giant: “Huawei will only be able to use the public version of Android and will not be able to get access to proprietary apps and services from Google.” Google, owned by Alphabet Inc, said its Google Play app store and the security protections from Google Play Protect would continue to function on existing Huawei devices.

Kate Bevan, editor of Which? Computing, suggested that some recent purchasers of Huawei devices could consider returning their phones.

“It’s unacceptable for consumers to be left without adequate security on their mobiles and Huawei owners will be seeking urgent reassurance that the safety of their devices will not be compromised,” she said.

“In this situation, your consumer rights are limited as there’s currently nothing faulty with these phones. However, if you purchased a phone in recent weeks it may be worth checking the retailer’s returns policy.”

Operators, who tie phones into their networks with mobile line contracts for calls and data, are struggling to determine the impact on their businesses from Google’s decision. “We are reviewing the details of the executive order to understand any potential implications for our customers,” Spain’s Telefonica, Europe’s third largest mobile operator. Three told customers that Huawei’s routers and devices would continue working, but also said it was seeking further information. “We are in discussions with Huawei and will provide a further update as soon as we can,” the firm said in statement.

On Monday, Google said it was “complying with the order and reviewing the implications”, but assured Huawei users that their current phones would continue to work.

“For users of our services, Google Play and the security protections from Google Play Protect will continue to function on existing Huawei devices,” a Google spokesman said.

In response to the restrictions, Huawei said it would “continue to provide security updates and after-sales services to all existing Huawei and Honor smartphone and tablet products covering those which have been sold or are still in stock globally”.

The Chinese company also remains at the centre of a security debate in the UK over its involvement in forthcoming 5G networks.

Critics of the company have said using Huawei equipment in key communications infrastructure poses a risk to national security because of alleged links between the firm and the Chinese state.