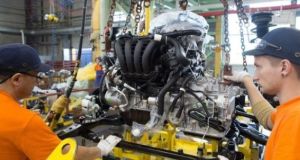 Hope is on Covid vaccines to revive the Irish manufacturing sector.

Activity in the Irish manufacturing sector remained weak in February, as output and new orders fell again, and severe pressure on supply chains remained. However, employment continued to rise, and sentiment remained strong as companies eye an economic revival later in the year.

The AIB Ireland Manufacturing PMI stood at 52.0 in February, up slightly from 51.8 in January, signalling a slight overall improvement in business conditions.

This means that firms are reporting weak demand and thus falling new orders in Ireland and from the UK. As a result, there was a further marked decline in manufacturing output in the month, with order backlogs continuing to fall too.

Supply chains remained under severe pressure, with Brexit widely cited as the main cause of major delays, leading to a further marked lengthening in deliverytimes which were again at a near-record degree. Raw material shortages and increased shipping and customs costs drove input price inflation to the highest in four years. This was passed on to customers as manufacturing output prices rose the most since March 2011, and at the fourthhighest rate in the series history.

Looking ahead however, the survey strikes a note of optimism.

“On a more positive note, employment rose again for a fifth consecutive month. Meanwhile, firms remained very optimistic about the 12-month outlook for production. They expect the rollout of Covid vaccines to bring an improvement in economic conditions as lockdown restrictions are lifted during the course of the year,” said Mr Mangan.