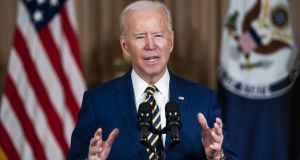 A remarkable and radical economic experiment is about to be conducted in the US.

Almost unnoticed on this side of the Atlantic, Joe Biden is winding the policy clock back almost half a century to an era when governments believed that fiscal policy could be both a tool for business cycle management and a force for good.

The nether regions of publications like the Financial Times and the Economist have reported on this historic change but, for the most part, European policymakers and commentariat have ignored it.

Biden took to the stump this week, extolling the virtues of his $1.9 trillion plans. These come on top of $900 billion of stimulus passed by Congress in December and $3 trillion early on in the pandemic. There are hints that once the pandemic is declared over, Biden would like to indulge in even more fiscal largesse. John Maynard Keynes is back.

I remember then UK prime minister Jim Callaghan’s 1976 speech to the Labour Party’s annual conference when he famously buried Keynesian economics and embraced the thinking that led directly to the austerity policies and politics of the next 40 years. Biden has not just resurrected Keynes, he’s introducing a bionic version of the long dead economist.

The immediate Biden proposals include additional cheques to be written to almost every US citizen, increased pandemic-related spending, cash for local government and extended unemployment benefits. Infrastructure programmes and other economy boosting measures are waiting in the wings for later this year.

Biden is taking to heart the advice of his new treasury secretary Janet Yellen “to go large”. The Federal Reserve is on board, as is the IMF. The question naturally arises, why?

After 40 years of the “Washington consensus” that converted Callaghan and lectured the world in terms of fiscal orthodoxy and austerity, why are we going back to policies that were abandoned in the late 1970s? And why is Europe ignoring all this? Where are our cheques, new roads, hospitals and schools?

The most obvious answer is that Biden is doing it because he can. The opportunity to borrow at historically low interest rates is simply too good to ignore. In principle, borrowing for next to nothing to spend on projects that yield a positive return looks like an idea to which any finance director would give approval. But the thinking runs much deeper than this.

For years, the US and other major economies have been mired in low growth and, relatedly, falling interest rates. Where Japan went decades ago the rest of the world has been following.

Ex-US treasury secretary and Harvard professor Larry Summers famously coined the term “secular stagnation” to describe this economic malaise. It may be opportunistic, but Biden and his team have decided to try and kick the US economy onto a new, higher, growth path.

Another element to their thinking must be that they have about 18 months to make a difference, to bury Trumpism. The mid-term Congressional elections due in late 2022 could see the Democrats lose either the Senate or the House (or both). Then there is another short two years before Trump, or his successor, runs for the White House.

Biden’s calculation must be that enough of Trump’s 75 million voters have to be persuaded, via their incomes and jobs, that an attractive alternative exists. Seen in this light, Keynes has been brought back from the dead to see off the populist threat. It’s about politics as much as it is pure economics. Perhaps it was ever thus.

The US economics community is engaged in a lively debate about the merits of Biden’s boldness. And the usual suspects are not always lining up in ways that we might expect. Summers, for example, has expressed grave doubts about Biden’s plans. As has the ex-chief economist of the IMF. Paul Krugman and the current chief economist of the IMF have signalled their approval. On the surface, the arguments are familiar and just rehearse the economic debates of the 1970s.

A lot of the discussion is conducted in the arid terms of the economics seminar. Does the US economy actually have enough spare capacity such that Biden’s boost will not be dissipated in inflation? That involves an analysis of something called the “output gap”, the difference between where the economy actually is and where it could be, if it was at full employment. It’s a concept that, like Keynes, should have been buried decades ago but, unlike Keynes, should have stayed dead.

Modern economics has put Keynes’ insights into mathematical terms: we build models that show how easy it is for an economy to get stuck, pretty much anywhere, particularly at low levels of growth. There is no one unique path for the economy, something that all that output gap analysis presupposes.

If Biden gets his plans through Congress the experiment will play out in real time. My hunch is that he is doing exactly the right thing. My worry is that Europe, in ignoring all of this, is once again doing exactly the wrong thing.

A decade ago, the EU had a terrible financial crisis and botched the policy response once it was over. Its tendency for stasis and sullen acceptance of the status quo leaves it blind to alternatives and vulnerable to the populist plague that is fed by failure to embrace new - or old - ideas.