Cliff Taylor: Additional cost of Level 5 constraints is about €1bn a month 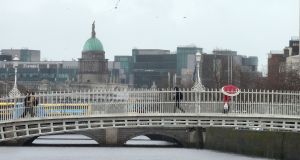 ‘The longer lockdown continues, the wider the economic impact will be and the higher the risk that more of these costs will persist beyond the end of the pandemic.’

The extension of significant restrictions up until at least early April and the slow economic reopening signalled thereafter will mean the special funds allocated to deal with Covid-19 in last October’s budget are all likely to be spent by the summer.

As the pandemic unemployment payment (PUP),the wage subsidy scheme and other supports are extended, the additional cost of Level 5 is about €1 billion a month.

This means a new package for whatever support programmes continue after the summer would have to be presented and voted through the Oireachtas.

In terms of the budgetary arithmetic, this does not necessarily mean the budget sums will go off track – cash can be saved elsewhere or taxes may come in ahead of the schedule. But, as with the July Stimulus last year, Minister for Finance Paschal Donohoe and Minister for Public Expenditure Michael McGrath will have to outline what they will do for the balance of the year and where the money will come from.

And, of course, the longer lockdown continues, the wider the economic impact will be and the higher the risk that more of these costs will persist beyond the end of the pandemic.

The Government supports have protected a lot of companies and individuals: inevitably these supports will be gradually run down at some stage. The amounts being spent on economic supports , particularly on the continuation of the pandemic unemployment payment and the wage subsidy scheme, are enormous.

The PUP alone has cost €6 billion since last March. Of that, about €1.1 billion has been spent this year and adding in the wage subsidy scheme brings the total between the two to €1.7 billion in 2021.

The budget for this year was set on what looked at the time to be fairly cautious assumptions, but a prolonged general shutdown was not anticipated.

This means that the €5.5 billion put aside in two funds to cover contingencies for Covid-19 and Brexit is already running down quickly and is likely to be gone by the summer. Significant funds were also put into departmental budgets to deal with Covid-19 as well – about €6.5 billion – so the overall cost is huge.

Whether the overall budgetary arithmetic for 2021 will be thrown off course remains to be seen. Davy stockbrokers economist Conall Mac Coille said the Government had the option of paring back on spending plans elsewhere to stay within budget targets.

Much will also depend on tax trends – the January exchequer returns showed income tax remained solid, but the closure of much of the economy led to sharp drop in VAT. When the rest of the retail sector can reopen will be a key issue.

Beyond that, significant supports will be required in the second half of the year. Mr Donohoe and Mr McGrath will hope that, as the economy reopens, these supports can be targeted more on sectors worst affected and on helping the economy to reboot.

This would mean gradually phasing out the general availability of wage subsidies – which may lead to the closure of many companies now barely hanging on. The future of the PUP will also be controversial, with unemployment set to stay at a high level for a prolonged period.

In the UK, consideration is being given to encouraging firms to re-employ workers and something similar may be considered here, along with significant spending on other jobs market policies.

The Government will have to make a stab of how this will all add up in the budgetary update presented to the European Commission in April. But a fuller plan to return the public finances to some kind of stable path over the next few years will probably only be possible when the Government can be sure that the worst of the health crisis is past.