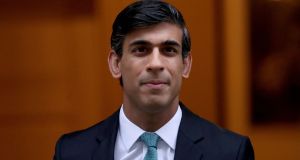 UK chancellor Rishi Sunak will use the election of Joe Biden as partial cover for a big budget increase in corporation tax rates, arguing that the US president is also planning a rise in business taxes.

UK government officials note Mr Biden – and more recently US treasury secretary Janet Yellen – have proposed an increase in corporate tax rates from 21 per cent to 28 per cent.

Officials working on the budget say Mr Sunak wants to keep Britain’s business taxes “competitive” with other G7 countries; that formulation could allow rates to rise to 25 per cent or higher.

The proposed rise in the headline corporate tax rate in the US would give Mr Sunak greater scope to increase the UK rate. Mr Biden explained his policy on the basis of budgetary prudence and fiscal equity.

British officials say a notional headline rate of 25 per cent would still be among the lowest in the G7 group, although such an increase would trigger a backlash from some Conservative MPs. The UK Treasury declined to comment.

Business groups have expected smaller rises – perhaps to 23 per cent – and one former Tory cabinet minister claimed the government was putting up “straw men” and that a smaller increase was likely.

“The idea of 25 per cent is a bad idea and would not fly with the Tory backbenches,” the ex-minister said. “A more modest increase is probably inevitable and probably manageable.”

George Osborne, former chancellor, wanted to cut corporation tax to less than 15 per cent as a post-Brexit signal to the world that the country wanted to be a magnet for investment.

4 Builders upbeat on prospects for next year despite partial shutdown