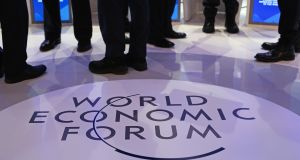 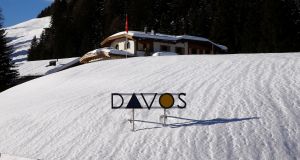 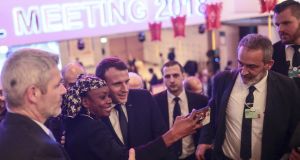 For global business and political leaders gathered for the 48th World Economic Forum annual meeting in Davos, the hassle of getting to Europe’s highest town is almost worth it – for the chance to tweet a photo of themselves with fellow “1 percenters” and the Swiss Alps as a backdrop alone.

Which is why The Irish Times thought it would be nice to go off-piste on Wednesday morning ahead of a day of speeches from political heavyweights like German chancellor Angela Merkel and French president Emmanuel Macron, by going to a session outside the main venue of the world’s biggest annual talkshop on “selfie culture”.

It promised to show how sticking a self-portrait on a social networking site is “changing the way we see ourselves and connect with the world”.

But it seems that even the culture of social media oversharing has its limits.

“Sorry, no media allowed,” we were told by a gatekeeper at the event.

Back in the main congress centre – home to 3,000 delegates and journalists for four days – even as International Monetary Fund (IMF) managing director Christine Lagarde tried in one discussion to solve a yawning generation wealth gap in Europe and Brazil’s president Michel Termer told another audience his country was “back in business” (even as it suffered another credit ratings cut this month), another zeitgeist topic was in full flow: fake news.

It comes at a time when a special US prosecutor, Robert Mueller, is investigating Russian meddling in the country’s 2016 election.

US president Donald Trump’s popularisation of the terminology “fake news” to undermine mainstream media outlets during his first year in office – especially as disinformation on social media is likely to have helped get him elected in the first place – drew scorn from Kahn.

“The president’s definition of fake news is fundamentally fake. It’s an all-purpose term to smear those who hold the powerful to account,” he said, adding that, while he doesn’t think that disseminating false information for political gain is the cause of “hyper-partisanship” in today’s world, it is “one of the symptoms of a decline in shared values and a share sense of truth”.

While the annual WEF meeting has found itself in the past decade at the centre of the international response to the 2008 financial meltdown and subsequent European debt crisis, this year’s gathering has been taking place against the backdrop of a buoyant global economy and with US stock markets trading at record highs. The IMF moved on Monday, on the eve of the conference, to upgrade its global growth forecast for this year and next to 3.9 per cent, respectively.

A report published by the WEF last week, ahead of the event, put environmental, cybersecurity and geopolitical issues at the top of risks facing the world. “If you’re reaching for things to go wrong and you’re pointing to geopolitical risk, you’re wracking your brain,” Harvard economics professor Ken Rogoff said on one of the early panels of the conference, on Tuesday.

However, this year the forum has found its central mission – bringing business, political, academics and other leaders together for the lofty cause of improving the state of the world – under attack from an anti-globalisation rhetoric espoused by Trump. It made Trump’s decision earlier in January that he would join the global elite at Davos this this time around – the first US leader to do so since Bill Clinton in 2000 – all the more curious.

“When it was announced that president Trump was coming, I think jaws dropped, because this wasn’t seen as his crowd,” said David Rubenstein, co-founder of US investment group Carlyle. “This has been the centre of the globalisation movement and he hasn’t been the biggest supporter of globalisation.”

It prompted a mobilisation of other global leaders to deliver a clear response – even before Air Force One landed in Zurich on Thursday morning and Trump made the final leg of his journey by helicopter to Davos.

Taking time out from efforts to form a government four months after inconclusive federal elections, German chancellor Angela Merkel warned on Wednesday of the rise of “national egotism” and a political climate that led to major conflicts in the last century, such as the first World War.

“In the way the political actors almost sleepwalked into a horrendous situation, we today, 100 years later, have to ask ourselves the very pertinent question: have we learned the lessons of history? We haven’t really,” Merkel said.

Merkel was followed within hours by an address from Emmanuel Macron, the self-styled poster boy-in-chief for globalisation, who issued a “call to all and every one of us” to push back against protectionist and nationalist forces.

“Let is not be naïve. Globalisation is going through a major crisis and this challenge needs to be collectively fought by states and civil society in order to find and implement global solutions,” he said.

Indian prime minister Narendra Modi and his Canadian counterpart Justin Trudeau had done their part on Tuesday to defend multilateralism.

US treasury secretary Steven Mnuchin and commerce secretary Wilbur Ross – sent to Davos as an advance party before the president – sowed the seeds of confusion on their arrival. While Mnuchin, a former Goldman Sachs banker, said that his country was “open for business” and “absolutely” believed in free and fair trade, he triggered a fall in the dollar to a three-year low against a basket of other currencies when he appeared to suggest on Wednesday the US was enjoying a weak dollar, which helps exports.

However, just a day later, he was forced to clarify that he was not abandoning the US’s long-held strong dollar policy, saying that “short term” weakness in the currency was not a concern.

Ross left no room for ambiguity in his opening salvo, saying the US, which slapped tariffs on Monday on imported washing machines and solar panels, was ready for trade wars.

“There have always been trade wars,” Ross said. “The difference now is [that] US troops are now coming to the ramparts.”

While Taoiseach Leo Varadkar and Minister for Finance Paschal Donohoe arrived in Davos trumpeting the message that Ireland is a fully paid-up member of the globalisation movement, our tax regime is coming increasingly under the spotlight as European authorities press for tax harmonisation.

“The contention that national tax policy should be set by national governments to allow them to fund national services for their own citizens is a proposition that has support all over the European Union,” Donohoe told reporters in the Swiss town. “I am confident that, amid the debate that is underway, that will be maintained. Ireland will continue to address matters in relation to corporation tax policy to ensure that our code is consistent with global best practice.”

For his part, Denis O’Brien told reporters on the fringe of the WEF that Ireland was at a crossroads.

“There’s a move for harmonisation of corporate taxes within the EU, which, obviously, Ireland has been fighting,” he said. “But the days of putting billions of sales revenue through Ireland to save on tax are just about over.”

Facebook responded last month to long-standing criticism by global governments of its tax planning by announcing that it will no longer account for non-US revenues from large advertisers through its Dublin unit. Instead, it will book the sales in about 28 countries – including France and Germany – where they are earned.

Meanwhile, Apple – which the European Commission decided last year owes the Republic €13 billion of allegedly illegal tax benefits – signalled last week that it plans to repatriate most of its $252 billion of cash held outside of the US, much of it once held by Irish subsidiaries. (Apple and the Republic are currently appealing the Commission’s finding.)

Taoiseach Leo Varadkar had to make do on Thursday evening, as he hosted 70 business executives at a dinner in Hotel Grischa in Davos, without the help of Bono, usually a perennial sight around the WEF gathering.

“The person who actually makes the biggest difference here is Bono, because his rolodex contacts for Silicon Valley businesses is better than anybody’s through Elevation Partners,” said O’Brien, referring to the tech-focused private equity firm, where the U2 singer is a co-founder and managing director.

This year, Bono is caught up with rehearsals in New York for this weekend’s Grammy Awards, where the band is performing. It’s sure to be selfie central.