Why is EU taking Ireland to court over €13bn Apple tax bill? 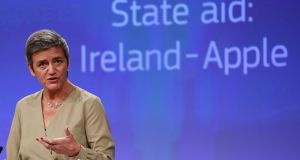 European competition commissioner Margrethe Vestager said on Wednesday she had referred Ireland to the European Court of Justice for failing to recover some €13 billion in illegal state aid from Apple. Photograph: EPA

So, Apple’s Irish tax affairs are in the news again. How long has this been going on for?

More than four years. The Irish tax affairs of Apple, which set up a manufacturing centre in Cork in 1980, first cropped up as an issue in Washington rather than Brussels.

In May 2013, US senators John McCain and Carl Levin labelled Ireland a tax haven after Apple’s chief executive Tim Cook told US lawmakers the iPhone maker paid an effective tax rate of less than 2 per cent in Ireland over the previous decade.

While Apple would go on to deny previous claims that it had an agreed special tax incentive with the Republic going back decades, European Competition authorities began to question Ireland, Luxembourg and the Netherlands the following month on various tax arrangements of companies, including Apple in Ireland.

What did the EU find?

The commission issued preliminary findings in September 2014, saying Apple’s tax arrangements were improperly designed to give the company a financial advantage in exchange for jobs in Dublin.

The final decision came in August last year, with the commission concluding that Ireland must collect up to €13 billion of illegal state aid from Apple going back a decade.

The heart of the Commission’s case is that the Revenue Commissioners afforded Apple an unfair advantage in two “rulings”, in 1991 and 2007, by allowing the group channel most of the income from European sales through “head office” divisions of two Apple subsidiaries in Ireland, which were non-resident for tax purposes.

However, Apple and the Government argue that as Apple’s products and services were created, designed and engineered in the US, the bulk of the profits of the units are due on the other side of the Atlantic.

Both the Government and Apple appealed the decision to the EU’s General Court in Luxembourg, but it is also likely to end up later on at the European Court of Justice (ECJ) - which is likely to push the whole appeals process to between four and six years.

Why is the Government appealing this? Wouldn’t €13 billion shave a huge amount off our national debt, or fund infrastructure investment?

In appealing the EU decision, the Government has said it is necessary “to defend the integrity of our tax system and provide tax certainty to business” as it continues to vie for inward investment and because it sees the whole case as an “encroachment” of EU state aid rules into Ireland’s sovereignty around taxation.

But why am I reading in the newspapers about the Government failing to collect the Apple back-taxes, if the case is under appeal?

The Government agreed last year to collect the Apple back-taxes, plus interest, and hold it in an escrow account (a special account that can’t be touched) until the legal process was complete. It was originally given a deadline of early January.

The problem is that this case involves by far the biggest amount the EU has ever directed a government to collect. The sums involved mean that it cannot be transferred into a bank account.

In fact, most of the amount will not be held in cash, but bonds - along the lines of how Apple runs its own cash hoard, which stood at $261.5 billion (€222.8 billion) in early July.

As such, Minister for Finance Paschal Donohoe has agreed with Apple to set up a fund to hold the money.

The Government is currently running a process to hire custodians to safeguard the money, and investment managers to handle the bonds. As things stand, these are not due to be appointed until the middle of November.

Indeed, Donohoe has argued the EU procurement process the State must go through to hire these money managers has only added to the delay.

Surely the Government has been in close contact with the EU all along?

It has but the State, through the National Treasury Management Agency, only started the procurement process in July - six months after missing the original deadline.

In fairness, though, there has been a lot of technical and legal work ongoing in the background, as the size and nature of the escrow account is unprecedented.

In addition, the Revenue Commissioners has to make sure to align the EU’s formula for how it arrived at the €13 billion with Irish tax law to come up with the exact amount that needs to be collected.

Procurement documents for the investment managers have indicated that the figure could be as much as €15 billion, including interest.

Why has the EU decided to refer Ireland to the ECJ?

The European competition commissioner, Margrethe Vestager, took aim this week at the fact that Ireland hasn’t even collected some of the money from Apple and that the Commission has made it a general practice that after a “full year of back and forth and there is no recovery”, it refers the issue to Europe’s courts as a matter of course. “It is the general strategy of this Commission to legislate less and implement more,” she said.

Will this particular case ever be heard?

It’s unlikely. The Commission indicated on Wednesday that Ireland expects to have completed the recovery in full by the end of March. While that’s still some time away, it’s unlikely that the case would have made it to a hearing by then.

Still, the fact that the Commission has taken this action does provide a stick to ensure the Government gets a move on.

There is also the possibility of fines way down the line, if the case is actually heard by the ECJ and the State doesn’t adhere to the court’s ruling.