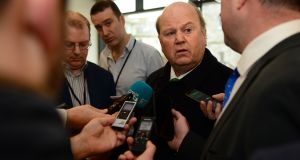 Less than two weeks shy of the anniversary of last year’s inconclusive general election, senior ministers are calling time on the lifespan of the Government.

Minister for Finance Michael Noonan said on Thursday that the notion of another vote being called has moved “centre stage on the political agenda”, as Taoiseach Enda Kenny deals with the fallout from the handling of Garda whistleblowers.

At the very least, warnings of an election, which were raised at a Fine Gael parliamentary party meeting on Wednesday by two would-be successors to Kenny, Ministers Leo Varadkar and Simon Coveney, are being interpreted in political circles as a warning to the Taoiseach that his days are numbered.

But even as domestic politics rattle investors in Dutch and French government bonds, global money managers have all but ignored the jitters building up around the Dáil this week about the prospects for the minority Government. And it’s not down to overseas investors being perplexed by the specifics of how a Garda whistleblowing scandal, which has dragged on for more than a decade, has landed Kenny at the centre of a classic political who- knew-what-and-when crisis, according to analysts.

“Political risk is de rigueur across euro zone bond markets right now, but investors are relatively discerning on this issue, reacting to actual event risks – such as upcoming elections in the Netherlands and France – rather than imagined risks,” said Donal O’Mahony, global strategist at Davy.

The market interest rate, or yield, in France’s benchmark 10-year bonds has blown out by as much as 57 per cent to 1.16 per cent over the past four weeks, while the coupon on similar Dutch notes has widened by up to 66 per cent to almost 0.7 per cent.

The yield on Ireland’s 10-year bonds, which was up to 11 percentage points above French securities at the height of the financial crisis, has increased by up to 45 per cent, to 1.239 per cent, over the same period.

The rate governments must pay to issue debt ultimately feeds into budgets and the price State-owned companies and banks face when raising debt in the market. These costs are ultimately passed on to businesses and households.

The State’s journey from exile to “core” player in Europe’s bond markets appeared complete this week as the market rate on Irish bonds converged with that of France for the first time in almost a decade.

The development, however, was down more to concerns about the possibility of right-wing French politician Marine Le Pen becoming that country’s next president than bond investors taking a rosier view of Ireland’s creditworthiness. Even though polls currently indicate that Le Pen will lose out in a run-off vote in May against independent candidate Emmanuel Macron, her pledge to hold a “Frexit” referendum on exiting the euro has markets on edge, not least because of the unforeseen poll outcomes last year.

Meanwhile, campaigning for the Dutch election got under way on Wednesday, with eurosceptic, anti-immigration politician Geert Wilders the clear front-runner ahead of a national vote on March 15th.

“Irish political risk is quite unique in European circles,” said Ryan McGrath, head of fixed-income strategy at Cantor Fitzgerald in Ireland. “We don’t have one of those far-right, anti-European factions that have been growing elsewhere. In the event of a general election here, either Fine Gael or Fianna Fáil will end up leading the next government, so there won’t be any significant changes in policies.”

Fianna Fáil, Fine Gael and the Labour Party, the three traditional parties of government, polled a combined 59 per cent in a poll published by the Sunday Times last weekend.

“Significantly, this aggregate poll rating is three percentage points above the combined share they achieved in the February 2016 general election, which means Ireland is one of the few western countries that is seeing a swing to the middle ground at this time,” said Philip O’Sullivan, an economist with Investec. “So, an election, were it to happen, is only likely to bring nothing more than change in faces around the Cabinet table.”

But an election is not without risks.

Were one to be called in the coming months, it would likely put off the State’s long-awaited sale of a 25 per cent stake in AIB. Noonan said late last month that an initial public offering of the bank, which cost €20.8 billion to bail out during the financial crisis, would most likely take place in May or June, even if there is another “window” for a deal in the autumn.

An election would also prompt fresh scrutiny of policies of Fianna Fáil, currently leading in opinion polls, such as its bid last year to give the Central Bank the ability to cap mortgage interest rates.

In the event of a general election here, either Fine Gael or Fianna Fáil will end up leading the next government, so there won’t be any significant changes in policies

While a Fianna Fáil Bill on this issue passed an initial stage of the Dáil without a vote last May, it hasn’t progressed. The Central Bank has been clear that it doesn’t want such powers and the European Central Bank has warned that such a cap would further hit competition in the market and possibly force banks to push up the cost of other types of loans.

McGrath at Cantor Fitzgerald said that with the Government having eased off on reining in public finances, markets may be concerned if a new administration, particularly one led by Fianna Fáil, may place “more emphasis on social spending” than continuing to correct the budget deficit. The Department of Finance currently projects that the State return to a small budgetary surplus in 2019 – the first time since 2007.

Then there is Brexit, and the prospect of political eyes in Dublin being taken off the ball at a time the UK is preparing to start divorce talks with the European Union by the end of next month.

For the moment, euro-zone bond markets are cushioned by the European Central Bank’s €2.3 trillion bond-buying programme, known as quantitative easing, which is designed to reignite inflation and economic growth. Economists largely expect the ECB to signal in September how it plans to wind down that programme, exposing governments to the full vagaries of the debt markets.