Richie Boucher appointed as next chairman of CRH 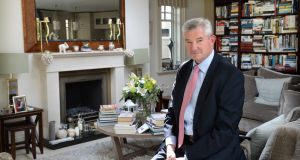 Mr Boucher (61) joined the CRH board in March 2018 and has been chairman of its remuneration committee since September of last year. He was Bank of Ireland CEO between February 2009 and October 2017, steering the company through the financial crisis while securing external investment that meant the lender did not become majority owned by the State.

Born in Northern Rhodesia, Mr Boucher spent 37 years in banking in Ireland the UK and the United States.

On his watch, Bank of Ireland fully repaid the the €4.7 billion in bailout funds that it received from the State, returning more than €6 billion by the time he left the company. The State still holds a 14 per cent stake in the bank.

After stepping down from Bank of Ireland in 2017, Mr Boucher worked as an advisor to Fairfax Financial Holdings, a Toronto-based investment group led by Prem Watsa.

He is currently also a non-executive director of US property group Kennedy Wilson Holdings Ltd, and of Eurobank Ergasias SA, a Greek financial institution.

Mr Boucher would be considered as independently-minded and a strong strategic thinker with an ability to provide constructive challenge to management, skills that should stand in good stead as CRH chairman.

Mr Hartery has been chairman of CRH since May 2012 and a board member since 2004.

CRH has also appointed Johan Karlström as a non-executive director, with immediate effect. Mr Karlström (62) was president and CEO of Skanska AB, a leading multinational construction and project development company until 2017. He is currently a non-executive director of Sandvik AB, an engineering group in mining and rock excavation, metal-cutting and materials technology.

Mr Hartery said the appointments were “important steps in the ongoing process of board renewal” at CRH, the largest listed company in Ireland.

“Richie’s appointment as chairman designate follows a robust and thorough selection process led by CRH’s senior independent director Gillian Platt, ” he said. “With a track record of creating value for shareholders, he is ideally equipped to lead the board through the next phase of the group’s development.”

CRH chief executive Albert Manifold thanked Mr Hartery for “ his stewardship following the financial crisis and [FOR]overseeing the significant reshaping of CRH’s portfolio and our ongoing business improvement initiatives during his tenure as chairman”.

1 I want to change my will quickly in case I fall ill. Do I need a lawyer?
2 EU finance ministers hold marathon talks to overcome eurobonds split
3 Coronavirus: Property rental in the jaws of the epidemic
4 Firms in row with Irish Distillers must provide €1m in security
5 Cold water poured on idea of ‘helicopter money’
6 Collison brothers worth an estimated €2.9bn each
7 NTMA raises €6bn from bond auction to help State meet Covid-19 costs
8 WhatsApp limits message forwarding to slow spread of misinformation
9 Irish back pain medical device group to pull stock market listings
10 Ardagh seeks to raise an additional $200m
Real news has value SUBSCRIBE