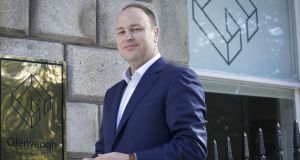 Mr Garvey, the recently installed chief executive of the residential housebuilder, notified the Irish Stock Exchange on Monday that he had bought the shares at a price of 66.4 cent each. Shortly after 9am on Monday, shares in the company were trading at 68.6 cent apiece.

The disclosure follows two other announcements over the past fortnight in which other directors confirmed they had acquired shares. Dalata chief executive Pat McCann, a non-executive director at the homebuilder, last week bought 70,000 shares at a price of €44,520.

The share purchases come in the wake of news that former chief executive Justin Bickle left the company in August, a revelation that saw Glenveagh’s share price fall to a record low of 59.8 cent a share.

Eddie O’Connor’s Mainstream to be sold to Norway’s Aker in €1bn deal 11:12
Construction ‘to grow by 15%’ in 2021 despite Covid and Brexit 10:34
Logitech lifts annual forecasts for third time as quarterly profit soars 10:02
European shares rise on upbeat earnings reports 09:06
Hammerson collects 31% of rent due at Irish properties as Covid-19 curbs tighten 08:41