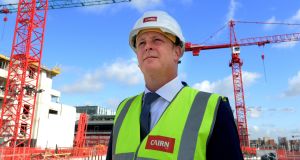 Michael Stanley: ‘Given market demand for our product and delivery pipeline, we look forward to the full year with confidence.’ Photograph: Cyril Byrne

The company will return €45 million to investors through its first dividend and a share buyback scheme after reporting on Thursday that profits in the six months ended June 30th rose 21 per cent to €27.3 million.

Alan McIntosh, the Scottish businessman who co-founded the builder with Mr Stanley and others, will receive a dividend of some €990,000 as he owns 39.6 million shares.

Speaking after the company published results for the first half of the year on Thursday, Mr Stanley said that its operations generated €45 million in cash in first six months of the year.

“All of that we are giving back to shareholders,” he said. “We need to repay those institutional shareholders that were prepared to invest well over €800 million in this company four years ago.”

He indicated that Cairn was likely to return more money to backers in the future as its business continued to generate more cash than it needed. However, he pointed out that the board would decide on timing and amounts.

Cairn is building houses and apartments on 15 sites in the greater Dublin area including Parkside, Maynooth and Citywest. The company also has plots in Cork and Galway that it intends developing.

Cairn’s shares fell 6.75 per cent to €1.08 on Thursday despite news that profits rose and it was returning cash to investors.

Mr Stanley said that Brexit fears and general concerns about the economy weighed on all Irish stocks, including the builder’s.

“I did not get overly excited a year ago when our share price was ‘X’ and I am not overly down because it’s ‘Y’,” he said.

“Cairn has delivered good revenue and profit growth and strong cash generation in the first half. Given market demand for our product and delivery pipeline, we look forward to the full year with confidence,” said Mr Stanley.

The company said the sales it has closed so far this year had a value of €446.6 million, up from €378 million this time last year.

Earlier this year Cairn sold its first build-to-rent development of 120 apartments at 6 Hanover Quay. Since then it has agreed to sell 282 apartments in Citywest for €94 million.