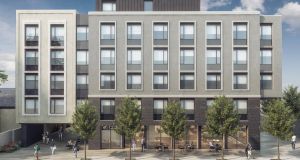 Richard Barrett’s Bartra Capital has been refused permission for a second time on a plan for a seven-storey 102 bed-space build-to-rent co-living development in Rathmines.

In its decision, Dublin City Council found that the proposed bedroom units “would provide a poor standard of residential accommodation by virtue of their design, layout and orientation, in particular the internal configuration of the units”.

Recommending that permission be refused for the Ardee Road development, planning officials said: “The number of occupants per floor having access to just a single kitchen/living area is considered objectionable.”

The plan envisaged between 13 and 18 residents per floor above the ground floor.

Noting that room plans indicated that the bed and chairs would be required to be stored in order to use the room for living space, officials advised that residents “should be able to enjoy a permanent furniture layout for both living and sleeping”.

“I am concerned about a disturbing precedent being set which will encourage a race to the bottom in residential provision in this country,” he said.

A spokesman for Bartra said on Tuesday that it would await the Council planner’s report before commenting on the decision.

He said however that the design approach in Rathmines was similar to the approved development in Dún Laoghaire.

1 Major credit union plans to limit savings accounts to €40,000
2 Brother is dragging his heels as executor of uncle’s will - is there anything I can do?
3 Inflated GDP data set to cost Ireland in share-out of EU recovery fund
4 Tesla’s Elon Musk calls for breakup of Amazon in tweet
5 Passengers face queuing in car parks at Dublin Airport
6 Student accommodation sector set for harsh Covid-19 lesson
7 Woodchester founder Craig McKinney dies
8 Land dispute between Citywest Hotel owner and neighbours before court
9 ‘I have a talent for justifying purchases’
10 Revenue tells court it was entitled to raise €1.64bn tax assessment against Perrigo
Real news has value SUBSCRIBE