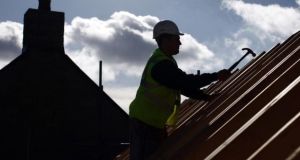 The construction industry should be worth just under €17 billion to the Republic in 2017 and employ about 140,000 people, according to Linesight

Construction could create up to 80,000 new jobs if it were to grow to full capacity, a leading industry consultancy says.

Quantity surveyors and consultants Linesight’s annual Ireland Handbook for 2017 shows that the building industry grew by 18 per cent in 2016 and is poised to expand by a further 15 per cent this year.

According to the firm’s managing director for Ireland, Richard Joyce, the industry should be worth just under €17 billion to the Republic in 2017 and employ about 140,000 people.

However, he pointed out that this represents just 7.5 per cent of the total economy, which is behind the 10 per cent to 12 per cent share that construction takes in most European countries.

His firm estimates that if the industry were to reach full capacity, it would be worth closer to €25 billion a year and employment would grow by a further 75,000 to 80,000.

Recently the Economic and Social Research Institute predicted that continued growth in construction could mean the Republic could cut joblessness to 5.6 per cent within two years, which some regard as full employment.

The institute also warned however that the “disproportionate” role that the industry was playing risked overheating the economy in much the same way as it did a decade ago, ahead of the recession.

Linesight, formerly known as Bruce Shaw, is an Irish company with offices here, in Britain, Europe, the Middle and Far East, and the US. It advises clients on virtually every area of construction barring design. The company’s handbook is considered a key source of information within the industry.

Mr Joyce acknowledged that the €38 billion to which the sector had swollen ahead of the property and construction crash that sparked the recession was “unsustainable”.

However, he pointed out that the normal European standard suggested that it could be a sustainable industry and part of the economy at about €25 billion.

Commercial building in Dublin played a big role in last year’s growth, according to Linesight. “We see that expanding into the regions with developments in centres like Cork and Galway,” Mr Joyce said.

Along with that, recent developments in areas such as pharmaceuticals mean that industrial construction is also growing.

The expansion means that there is a shortage of workers, according to Mr Joyce. The industry’s workforce has grown to 140,000 from fewer than 100,000 a few years ago and there is a growing demand for craftspeople and professionals.

Linesight itself took on 140 people over the last year. Of that, about 30 per cent had returned from countries to which they emigrated during the recession. “We have had a lot of people coming back from the Middle East, Canada and Australia and we are beginning to notice people from Britain looking to come back,” Mr Joyce said.

He added that he was not sure if this resulted from the UK’s vote to leave the EU last year. Brexit is likely to have an impact on the industry here.

“There are definitely opportunities from the construction point of view,” Mr Joyce said. “We know that there is an increasing number of enquiries in the Dublin commercial market.”

At the same time, Linesight’s clients in London are taking a cautious approach. The firm believes that construction in Britain is slowing down.