Project will have gross development value of €79m 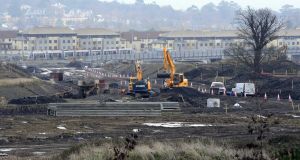 Preparation of a masterplan for the Cherrywood lands, which were acquired last year from investment firms Hines and King Street Capital for more than €120 million, are said to be at an advanced stage.

The project will have a gross development value of €79 million and comprise 113 houses, 40 apartments and duplexes and a local centre containing three units for retail, restaurant or cafe use. The site is adjacent to Quintain’s Dún Sí development of 150 homes which was launched for sale last year, with prices ranging from €350,000 to €710,000.

“We are very pleased to have secured this planning approval which takes us a step closer to achieving our wider vision of delivering almost 1,000 new homes in Portmarnock,” said Michael Hynes, joint managing partner of Quintain Ireland.

Lone Star set up a Dublin-based unit of its UK property development business Quintain late last year after abandoning a plan to roll its massive Irish residential landbank into a publicly-quoted company.

The company aims to deliver 9,000 homes and 600,000sq ft of commercial space on 460 acres of land on the outskirts of Co Dublin, including Adamstown, Clonburris, Cherrywood and Portmarnock. That would make it the Ireland’s third-largest homebuilder in the Republic, after Cairn Homes and Glenveagh Properties.

D|RES Properties, led by Patrick Durkan, who had been lining up with Lone Star to create the abortive Dublin-listed development company up until last year, will build the 153 Portmarnock homes for Quintain Ireland.

Meanwhile, Quintain is in discussions with South Dublin County Council in relation to three further planning applications in Adamstown, which have the potential deliver more than 700 units.

Preparation of a masterplan for the Cherrywood lands, which were acquired last year from investment firms Hines and King Street Capital for more than €120 million, are said to be at an advanced stage. Planning applications related to several hundred units are expected to be lodged within the next six months.

1 ‘Saudi Arabia is where the opportunities will happen in future’
2 MSD buys Takeda biologics plant in Dunboyne
3 Data centres will force State to choose between climate and investment
4 Nine Goodman companies made largely untaxed profit of €170m
5 Trump’s TikTok move may have far-reaching consequences
6 State’s biggest landlord records 30% rise in rental income
7 How the zombie apocalypse can help prepare us for real crises
8 What will the office market look like after the great remote working experiment?
9 The architectural revival transforming Cork’s landscape
10 Project Eagle: What was it and why is it in the news?
Real news has value SUBSCRIBE