Cantillon: Only time we had a major improvement in affordability was after crash 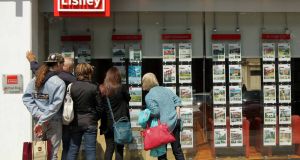 Housebuilders concede they cannot produce homes for people on average incomes because building costs here are too high.

It’s assumed almost without question by some commentators that the answer to the State’s housing problem is supply. If housebuilding can be accelerated from current rate (21,000) to say 35,000 units a year – the estimated level of demand – many of the aggravating issues associated with housing here will go away. Let’s be clear, they won’t.

House prices have been on the rise for four decades, home ownership rates have been in decline, and increasingly young people and people on low and middle incomes have been priced out, forced to live further and further away from their places of work or face steep rents with little or no guarantee of tenure.

The only time we’ve had a serious reversal of this trend and a meaningful improvement in affordability has been on foot of a global financial crash. That’s how locked in we are to this system of ever-eroding affordability. And it’s not just Ireland, countries and cities across the globe have similar issues.

The intractability of the problem was alluded to, perhaps inadvertently, by Glenveagh’s chief executive, Stephen Garvey, at the release of the homebuilder’s annual results yesterday. Garvey talked repeatedly about the fundamental problem in both the rental and purchase markets being the lack of supply. If this could be brought in line with demand, prices would stabilise, he said.

In the same breath, he admitted the company could not produce homes for people on average incomes because building costs here were too high. So how is this circle to be squared?

Tweaking the mortgage lending rules or expanding the Help to Buy scheme were mentioned as ways to enhance affordability. But would they really change the affordability dynamic that much?

Take the average dual-income household earning €80,000 and qualifying for a mortgage, under the current rules, of €280,000. Their purchasing power is nowhere near the median price paid for a house in Dublin last year (€370,000).

So we’re left in this vague limbo of hoping that wage growth will sufficiently outstrip property prices to make them affordable again. As of now, there is no evidence of this happening – here or in other jurisdictions.