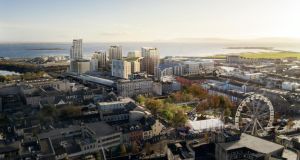 The skyline of Galway City will be altered significantly if plans lodged for an eight-acre site adjacent to Ceannt railway station just off Eyre Square are approved.

One tower of the proposed Augustine Hill development will be 21 storeys in height making it one of the tallest residential blocks in the State.

The €320 million planned development consists of 378 apartments, a large commercial area, a 180-bed hotel, a covered public area and a six-screen cinema. It is anticipated the development will be home to between 900 and 1,000 people when completed.

Speaking at the launch of the planned development, economist Alan Ahearne, director of the Whitaker Institute at NUI Galway, said the economic impact will be the equivalent of a large multinational; creating 600 jobs during construction over six years and 2,700 jobs in retail and tourism when the scheme is completed.

Dr Ahearne said Augustine Hill was consistent with sustainable living as its centrality will mitigate against urban sprawl in a city where the infrastructure is under severe pressure.

“The main tenants will be young professionals. You will see more high-tech businesses moving to Galway and that will attract talent in. When I look around the docklands in Dublin, it is buzzing with young people. You will have a lot of talented highly-skilled young people living and working in Galway city,” he said.

Augustine Hill is a joint development by CIÉ, which owns the land, Edward Capital, run by Galway developer Gerry Barrett, and Summix Capital. CIÉ held a competition in 2017 to find a developer for the site.

The project includes provisions for 11 new overlapping stacked avenues or “streets in the sky” which will be constructed at different heights to create a multi-layered, high-density development.

A spokesman for the developer said the development is consistent with recent urban guidelines about building up and increased density.

The spokesman said the apartments will not be sold off-plan to investment funds as many developments in Dublin have been, but will be offered on the open market to prospective homeowners and landlords.

More than 50 per cent of Augustine Hill will also be designated as public space, or roughly equivalent to the size of Eyre Square and Spanish Arch combined, the developers say.

The planning application includes a masterplan for the area prepared by international architects BDP following public consultation during 2017-2019.

The proposed development will also include a number of environmentally-friendly elements including the use of solar panels, green walls and wild roof gardens to attract bees and nesting birds, roof allotments and 1,150 bicycle parking spaces – twice the number of car parking spaces.

According to the project architect, Michael Mullen of BDP, the development will be unique in Ireland and could also provide the city with a fully covered, all-weather public space where large public events could take place.

Earlier this month the official launch of Galway 2020, the European Capital of Culture project, had to be cancelled as a result of adverse weather.

“There is nothing like this in Ireland at the moment. We have just finished something similar in Oxford but this will be a first of its kind in Ireland,” he said.

“It’s innovative because it’s stacked, you get streets in the sky with new public spaces which are built around existing protected structures.”