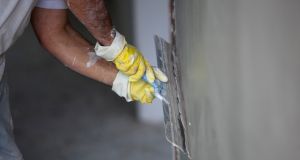 HBFI said on Thursday that it loaned a total of €114 million to finance the construction of 616 new homes around the State in its first 12 months. Photograph: Krisztian Bocsi/Bloomberg

The outgoing Government established HBFI in January last year as part of its efforts to tackle the housing crisis, to fund home-building projects that the Republic’s banks were not prepared to back.

HBFI said on Thursday that it loaned a total of €114 million to finance the construction of 616 new homes around the State in its first 12 months.

The organisation has a budget of €750 million from the Irish Strategic Investment Fund, a body set up during the recession to use money from the Government’s old national pension reserve to back job-creation projects.

HBFI must loan cash on a commercial basis. Recently it was repaid the cash it loaned for the construction of 10 homes in Allenwood, Co Kildare.

HBFI’s clients, including Ballymore, the multinational property player owned by developer Sean Mulryan, that is working on high-profile commercial buildings in Dublin and London.

The State organisation loaned the group €17 million specifically to fund the construction of 75 houses in Ballymore Eustace, Co Kildare, the village the group is named after.

HBFI chief executive Dara Deering pointed out that the organisation was meant to support builders when other finance was not available and that this could mean backing larger developers.

Other projects the body is backing include 20 homes at Wilmount View, a new housing estate that Kenny Timmons Development is building in Kells, Co Meath.

Similarly the State fund is financing 59 three- and four-bedroom homes at Árd Branagh in Portlaoise.

Just 22 of the houses whose construction HBFI has backed are in Dublin. The rest are spread around the State. In all, it is supporting 18 new developments in 12 counties.

Co Kildare had the largest number of dwellings funded by the State body, at 159. Co Cork was next with 133.

At the other end of the scale, it loaned cash to build 12 homes in both Co Clare and Co Monaghan.

HBFI loaned €1.3 million-€18 million to builders in its first year. The average deal was for €6.4 million.

Borrowers must put up at least 20 per cent of a project’s cost themselves. On average, the organisation loaned clients 60 per cent of an individual development’s cost.

The figures show that HBFI loaned €25 million of the total to fund 150 dwellings destined to be used by local authorities or approved bodies specifically for social housing.

It is understood that about 40 of the remaining 466 homes HBFI is funding will also be used for social housing, as planning laws require builders to earmark a portion of every development for this purpose.

Ms Deering said HBFI had made a “strong start” but had a lot more to do. She argued that house building had to meet the population’s needs.

“Social housing is a very real and pressing requirement and we are delighted to provide funding that directly increases the supply of homes for people who need them,” she added.