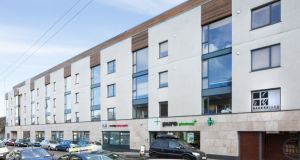 The Ires apartment development at Bakers Yard in central Dublin.

It has emerged that Ires recently hired Townlink to build 61 apartments at Bakers Yard close to Croke Park in central Dublin, where the company already owns 86 dwellings.

The development is one of several the landlord has planning permission for. Ms Sweeney told industry analysts that Ires hopes the new apartments will be finished next year while work has already begun on the site.

Dublin-based Townlink has been trading since the early 1990s. It regularly works for both State and private sector organisations, including the Republic’s other large-scale landlord Kennedy Wilson.

The value of its contract with Ires to build the Bakers Yard apartments is not known.

Meanwhile, Ms Sweeney said that Ires was continuing to work on proposals to build more than 500 apartments in Sandyford in south Dublin.

Ires was one of several finance and property-related companies whose share price tumbled after this month’s general election ended in a stalemate.

Sinn Féin emerged as the new Dáil’s second-biggest party with 37 seats, making it a potential coalition partner in any new government.

The party favours freezing rents for a period while the State tackles the housing crisis.

Legislation already bars landlords from increasing rents by more than 4 per cent a year in so-called pressure zones, which include the Republic’s main population centres, where demand for accommodation is high.

Ires owns 3,660 apartments. The average monthly rent it charges varies from €1,900 to €790 depending on a dwelling’s size and location.