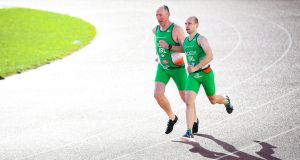 Insulation maker Kingspan is backing para-athlete Donnacha McCarthy financially as he aims to qualify for the 2020 Tokyo Paralympic Games.

The Cavan-based company said the move forms part of its wider sponsorship strategy to back high performance athletes, including golfers Shane Lowry and Leona Maguire, and teams such as Cavan GAA and Ulster Rugby.

Mr McCarthy is a blind athlete who competes in paratriathlons and is aiming to become just the second Irish para-athlete to compete in the Paralympic Games.

The Cork native, who lost his sight aged 10 following a battle with leukaemia, has been competing in paratriathlons since 2017, winning national titles in 2018 and 2019. He was a bronze medallist in the 2018 World Paratriathlon Cup.

“I’m really pleased that Kingspan is supporting me in my Paralympic goal to represent Ireland at the highest level, and come back with a medal,” said Mr McCarthy.

“His story is inspiring, competing in a hugely challenging discipline and maintaining his focus on qualifying for the Tokyo games,” he said.

1 Should my mam wait for house prices to drop before buying?
2 Two prominent business leaders in planning row with neighbour
3 Cheers: Conor McGregor's whiskey races up the sales chart
4 ‘I’m so lucky to be in the Caribbean – a million miles from Derry Girls’
5 Joint accounts: if one of us dies, can the other access the money?
6 Battle for control of America’s mammoth utility industry set to intensify
7 ‘The recovery needs to be a full-scale economic renewal’
8 US ‘hard seltzer’ drink White Claw launches in Ireland
9 ‘I have a talent for justifying purchases’
10 Chris Johns: Past is another country when it comes to our post-pandemic future
Real news has value SUBSCRIBE