Ikea gets green light to build affordable homes in UK

Retailer has joined with company that specialises in factory-built housing 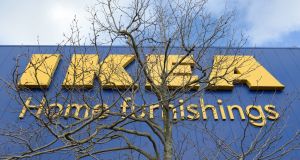 BoKlok sets property prices so that buyers have money left to live on after they have paid their housing costs. Photograph: Dara Mac Dónaill

Homebuyers in an English town where properties typically cost almost 12 times local salaries may soon have a low-cost option from Ikea after a UK council agreed to work with an affordable housing developer co-owned by the retailer.

Worthing council has signed up with BoKlok, a company jointly owned by the Swedish retailer and construction company Skanska which specialises in factory-built housing that can be constructed at a low cost.

The company sets property prices so that buyers have money left to live on after they have paid their housing costs, and its website says “a single parent can afford to buy and live in a newly built two-bedroom BoKlok apartment”.

It has built 11,000 homes across Sweden, Finland, Denmark and Norway, and is keen to break into the UK after a false start more than a decade ago.

Previous plans for a development in Tyneside were scaled back when the financial crisis hit, but its latest effort is a collaboration with Worthing council, which believes it can achieve more affordable homes through the deal than if it sells the land to a conventional developer.

Councillors in the coastal town have voted to work on a plan that would see 162 flats built on land that it owns.

The latest data from the UK’s Office for National Statistics showed that in 2018 average house prices in Worthing were 11.7 times average salaries, compared with a figure of 7.8 times across England and Wales.

In a report, the council said that access to homes was challenging for those on the average salary, which was £25,458 (€28,414) in 2015 – with only one-bedroom properties within reach, it noted.

An EY-DKM study in the Republic found a comparable picture recently, concluding that nearly half of all counties in the State are unaffordable for first-time buyers on average incomes

Under the Worthing plans the council will license the developer to use the land rather than selling it off, charging it an annual ground rent.

In return it will get 30 per cent of the properties to use as affordable housing to rent to local people, while the remaining properties can be sold by BoKlok based on its “left to live” affordability model.

This looks at how much residents can afford to pay after tax and monthly living costs have been deducted, and usually assumes that people can use about 33 per cent of their take-home pay for a mortgage.

The council, which has more than 1,300 households on its housing waiting list, said its analysis suggested the land could be used for 45 homes with just 13 of them available for affordable rent.

The company said it has “scrutinised our costs and trimmed them to the bone,” but there are no compromises on quality.