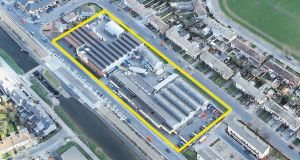 Part of the group, Durkan (Davitt Road) Ltd, recently applied to An Bord Pleanála for permission to build 265 apartments at the disused Dulux Paints factory site in Drimnagh under the fast-track scheme for large residential projects.

However, Drimnagh Residents’ Community Group has written to An Bord Pleanála criticising the plan, on which a decision is due in the next 10 weeks.

The organisation is concerned about the disturbance that the development could cause. “Such disruption, over a prolonged period, would be entirely unacceptable,” the community group says.

“Furthermore, we doubt that the area has the capacity to absorb a development of such scale.”

Locals argue that at seven storeys, the proposed apartment block is too high for the neighbourhood, which is a settled suburban area.

Drimnagh residents warn that it would increase traffic in an already congested region of the city and say there was no consultation about this with themselves or the Garda.

Residents also fear the development’s impact on the area’s waste water system. Liam Fitzgerald, the community group’s secretary, warns An Bord Pleanála in a letter to pay “close attention” to protecting the water sewer and drainage management before granting any permission.

The group notes that the project could increase noise and light pollution in the area. Similarly, residents’ representatives say that the developer has not assessed the impact on the nearby Grand Canal, which they note is a protected ecosystem.

In personal observation filed with An Bord Pleanála, Mr Fitzgerald points out that Durkan (Davitt Road) discussed the proposal with the planning board and other agencies.

“We feel that the developer could have discussed the proposal with his neighbours before making his application as we are the people that will be directly affected presently and in the future,” Mr Fitzgerald says.

Dún Laoghaire-based Brian M Durkan & Co intends to rent the apartments when they are complete. The company has already discussed providing some of the homes to Dublin City Council for social housing.

The final number used for this would depend on how many apartments planners allowed the company to build. Brian M Durkan & Co did not respond to a request for a comment on Friday.

The fast-track Strategic Housing Initiative allows developers of projects with 100 or more new homes to apply direct to An Bord Pleanála for planning permission. Under the process, the board has 16 weeks to decide. Its ruling can be reviewed by a High Court judge.