Elon Musk in talks with Israeli government to build tunnels 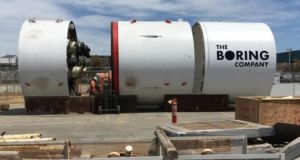 Boring is taking steps toward developing projects in cities such as Las Vegas, Los Angeles and Chicago, but doesn’t currently have any international projects

Elon Musk is in talks with the Israeli government to build tunnels in the country, Israeli prime minister Benjamin Netanyahu said at a campaign event this week.

Mr Musk’s Boring tunneling business could help boost much-needed infrastructure development in Israel, which suffers from a beleaguered public transportation system and the worst traffic in the developed world.

“I met a man that they call Elon Musk-- have you heard of him? A real genius,” Mr Netanyahu said at a campaign event Tuesday night when asked about the country’s transportation system. “Right now we’re in conversation with him to see if we can tunnel the State of Israel.”

Mr Netanyahu said he and Mr Musk had breakfast at the prime minister’s residence, and the entrepreneur discussed his tunneling technology. Local media reported Mr Musk visited Israel in March 2018.

Boring is taking steps toward developing projects in cities such as Las Vegas, Los Angeles and Chicago, but doesn’t currently have any international projects on its website. The company did not respond to emailed requests for comment.

Israel’s public transportation system is beset by issues, while the country’s traffic rises. Inefficient public transport could cost the economy 25 billion shekels (€6.14 billion) a year by 2030 if urgent changes aren’t made, the state comptroller found.

A spokesman for Israel’s Transportation Ministry did not respond to a request for comment.