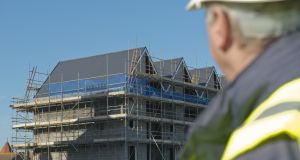 Report notes job creation in construction was at an 18-month high in December. Photograph: Getty

The construction industry finished 2020 in “expansion mode” fuelled by housebuilding, according to the authors of Ulster Bank’s construction purchasing managers’ index (PMI), a barometer of activity in the sector.

Housebuilding activity reached a five-month high on the index in December, although there was an end-of-year contraction in commercial building. Civil engineering was down sharply.

All sectors of the construction industry, however, are likely to suffer significant reverses in future Ulster Bank PMI reports, as the Government shut down most non-essential building in January as part of a suite of measures designed to arrest a spike in coronavirus infection rates and hospitalisations.

The authors of the report say job creation in the sector was at an 18-month high in December. They also note some of the purchasing activity could have been spurred by Brexit, as builders stockpiled materials when it appeared for much of the month that a no-deal outcome on trade was possible.

“The latest results . . .show a second consecutive monthly rise in Irish construction activity in December as the sector closed out 2020 in expansion mode, albeit at a slightly slower pace compared to November,” said Simon Barry, the bank’s chief economist in the Republic.

“Optimism about the year ahead improved further last month as sentiment rose to its highest level since February 2020.

“But while vaccine rollout plans continue to underpin confidence about medium-term recovery prospects, this week’s further significant tightening of public health restrictions, including a closure of most construction work until at least the end of January, represents a major setback for the wider Irish economy and the construction sector itself, which look set to start 2021 on a weak footing,” he said.