Plan would include restoration of former Player Wills building 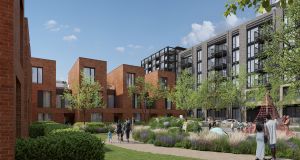 A computer-generated image of the proposed Player Wills development

Global property investment company Hines and APG are seeking planning permission for the next phase of its redevelopment of the Player Wills site in Dublin, with 732 new homes and two new parks proposed.

The strategic housing application will also include the restoration of the former Player Wills building in Dublin 8, turning the former factory into a new mixed-use space with 287 new residential units, including 240 shared living industrial-style loft units.

The development will also include the full restoration of the original building and an extension to the rear, with residential units, new community, artistic and cultural spaces, along with separate commercial space for activities such as small business and co-working facilities.

“Our extensive engagement with local residents over the past 18 months was a turning point in determining our approach with the much-loved Player Wills building,” he said. “Our aim here is to make the Player Wills building once again the beating heart of a new and vibrant community in Dublin 8.”

The application includes four new pedestrian access points into the Players Will site from South Circular Road, St Catherine’s Avenue and Donore Avenue; a low-speed internal road network that prioritises bicycle-users and pedestrians; and more than 1,000 dedicated bicycle spaces, 903 of which will be long-stay and located underground or in secure on-surface bike rooms.

Planning permission was granted in September for 404 new apartments, two duplex, three triplex apartments and four houses on the former Bailey Gibson lands. However, construction has been delayed until the outcome of a judicial review process is concluded.

If the second phase is approved, the combined Player Will and Bailey Gibson sites will deliver 1,552 new homes.

It may again face opposition from local residents, however, with the Dublin 8 Residents’ Association saying on Wednesday that it would be reviewing the new application “very closely, particularly in relation to height and the proposed co-living element which has been clearly signalled by government as undesirable”.