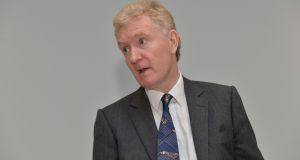 Housebuilder Abbey aims to more than double its Irish house sales this year, to levels not seen since before the State entered an international bailout in 2010, as prices continue to rise, according to the group’s executive chairman.

Speaking to The Irish Times on Tuesday after Abbey posted better-than-expected full-year profits for the financial year through April, Charles Gallagher said the Dublin-listed company “will probably do 80 plus” Irish sales this year. That compares to 39 last year and 23 for the prior 12-month period.

“Ireland is experiencing quite a strong recovery now, mortgage financing is improving steadily, and the Government’s help-to-buy scheme has definitely been helpful, particularly for areas 30 kilometres outside of Dublin,” Mr Gallagher said. “It also seems that employment will continue to rise.”

However, he said he is “considerably disappointed” by suggestions the Government may scrap the help-to-buy scheme, which was launched in January and helps first-time buyers of new homes accumulate a deposit through tax rebates of as much as €20,000. Recently appointed Minister for Housing Eoghan Murphy said last month that he’s concerned the scheme has driven up home prices rather than boost new supply.

Irish residential property prices surged by 11.9 per cent in May, fuelled by a 12.8 per cent increase outside of Dublin, according to figures published by the Central Statistics Office on Tuesday.

Mr Gallagher said that Abbey’s projects in Co Kildare and Co Laois “have become nearly viable” as a result of the help-to-buy scheme.

“Chopping and changing [policy] is not very helpful,” said Mr Gallagher. “From where I’m standing the scheme is working. It needs to be given time to really boost supply. Developers are dusting off old projects and they are finding that they need to do all sorts of things, such as renew planning, before they can build. People want an instant response, but there has to be a willingness to allow it develop.”

Abbey’s Irish landbank includes about 250 plots at “ready to build stage”, a further 200 or so that could be built if prices continue to recover and a “couple of hundred after that” subject to necessary zoning and planning permission, Mr Gallagher said.

“There’s no doubt that the help-to-buy scheme has brought forward more projects in the industry. There’s more activity, even if we’re not very good at measuring completions in this country,” he said.

Abbey, which completed 495 home sales in its main market in the UK last year and 52 in the Czech Republic, predicts a “jump in activity” in the current year in developments in Cabinteely, Co Dublin, and Dunshaughlin, Co Meath. Its projects in Delgany, in Co Wicklow, and Ratoath, Co Meath, “have performed well” in the past year, according to the company.

The Dublin-listed company reported on Tuesday that its pre-tax profit rose to €63.5 million in the 12 months to April from €61.5 million for the previous year. The result beat stockbroking firm Davy’s estimate by 9 per cent.

The cash-rich company is almost 82 per cent owned by Mr Gallagher and his family, who increased their holding from 76.7 per cent in January. The Gallaghers made a mandatory takeover bid for the entire company in 2012 after breaching the 50 per cent mark and had accumulated a 73 per cent position by the time the offer period expired that that September.

Mr Gallagher said the company has “no plans” to launch another takeover bid.