Louis Keating: ‘Keep some reserves – there are lean times ahead’

Good advice from entrepreneurs from Keating, an EY Entrepreneur of the Year finalist 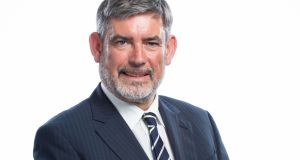 Louis Keating of L&M Keating: “Our strength is in our people”

Keating was born and raised in Dublin. After achieving a first-class honours degree in engineering, he worked for a number of companies, including ESB and John Paul Construction, before setting up his own business aged 27.

L&M Keating Limited is a building and civil-engineering company that specialises in marine construction. It employs 120 people directly and, since its inception, turnover has grown year-on-year to about €60 million.

What was your “back to the wall” moment and how did you overcome it?
I had many such moments in the early years, all involving money. In 1990 we were installing new lights on the runway in Shannon during night-time possessions. The Gulf War started, and suddenly, instead of one flight per night we had eight or nine flights and had to vacate the runway for an average of 25 minutes every time. It was virtually impossible to make progress in the eight-hour working window. The way the contract was written, though, all delays were at the contractor’s expense and left us open to severe penalties for time over-runs. What did I do? Doubled our resources, personally worked 20 hours a day to manage everything and prepared a claim for extra payment, which was eventually settled just before disaster struck the business. I also then took up a day job for a few years.

What moment would you cite as the turning point for the company?
Our first jetty construction job in 1998 was for the Tarbert-Killimer Ferry. As well as getting into a whole new specialist area that was of personal interest to me, it was the first job we got on technical ability rather than price. The ferry company had faith in my ability to get the necessary specialist plant and to be able to plan and manage the job successfully and get our workforce up to speed in the techniques required. In hindsight it was a huge leap of faith by both the employer and their designers, which we rose to. They are still a valued client.

What is your greatest business achievement to date?
I would say winning €100 million worth of marine construction work in Dublin Port (ongoing) in a joint venture partnership with Roadbridge of Limerick.

Describe your growth-funding path:
I had £30,000 [Irish pounds] in 1987, which I invested in the new business. Since then funding has been from retained profits plus asset finance for new equipment.

What is the single most important piece of advice you would offer to a less experienced entrepreneur?
Keep some reserves; there are lean times ahead.

To what extent does your business trade internationally and what are your plans?
Very little at the moment. We keep an eye on the UK market and tender projects from time to time. However, our strength is in our people – they are all based in Ireland, and we are able to keep them busy here and typically grow 5 per cent year-on-year. Therefore, there is no great push to work abroad.

Where would you like your business to be in three years?
I see a growth period emerging so I would expect turnover to be up 10-40 per cent. However, the most important thing would be to continue to trade consistently in a volatile industry, to maintain profitability, a steady workload and steady workforce and to widen the client base further.

1 Suspicions rife as key Brexit trade talks begin in Brussels
2 Corona beer firm reeling after 8% slide due to coronavirus
3 Life as a Facebook moderator: ‘People are awful. This is what my job has taught me’
4 Irish companies restrict travel over coronavirus fears
5 We have little chance of building enough homes to meet election promises
6 ‘The only time apartments were viable was in . . . Ballsbridge, Killiney and Dalkey’
7 How well paid do you think you are? Here’s how to work it out
8 Why Irish banks are now looking beyond vulture funds on problem loans
9 Pharma giant AbbVie warned Government against ‘unfair’ €572m tax bill
10 Coronavirus: Iseq down 11% in five days as global sell-off is worst week since 2008 crisis
Real news has value SUBSCRIBE