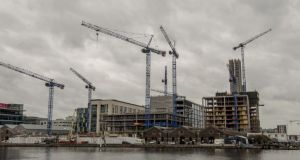 The task of housing all of our people remains a crucial challenge for the Government and for society as a whole.

Relative to earlier generations, a disproportionate number of those in their 20s and 30s are still living in the parental home but would like a home of their own. However, the numbers vacating dwellings through death or through trading down is small relative to the needs of the younger generation: hence the necessity to build many new homes.

Over the last 50 years there have been a number of periods of housing “shortages”. In the late 1960s and the early 1970s, in the Celtic Tiger years, and again today. In each case, the supply of housing was very slow to respond to a surge in demand. The result was a rise in real house prices.

Once housing supply caught up with demand, real house prices fell back. If the Government is successful in dramatically increasing supply, we could see some downward adjustment in house prices – eventually.

The rise in real house prices is an important signal encouraging a supply response. However, the response in terms of increased housing output is slower than ever this time round so that house prices and rents are continuing to inflate.

Economic theory tells us that when a factor of production is scarce, the main benefit of any rise in the price of the final product accrues primarily to that scarce factor. In the case of housing, there are more or less functioning markets for building workers and for building materials. Irish banks are slow to lend to the diminished pool of potential builders, but we have seen capital flowing in from abroad for some of the major apartment companies.

When house prices increase, some of the benefit accrues to builders, increasing their profit margins. In the crisis years, the profit margin for builders had disappeared and some restoration was necessary to ensure someone would supply the new homes needed. But if profit margins become excessive, new builders would enter the market and the profit margin would erode.

However, the really scarce factor of production is zoned and serviced building land, and land prices are rising rapidly in response to the increased sale price for housing.

If house prices continue to reflect what the market will bear, cutting VAT on building costs or grants to buy housing just gets captured in higher values for potential building land.

Where the State owns the building land, the public sector gets the “benefit” of higher prices. The unexpectedly high price RTÉ got for the sale of part of its Donnybrook campus reflected a site cost per apartment of more than €200,000.

The National Asset Management Agency took over ownership of a substantial amount of development land, which, in line with its legal remit, it has largely sold off. Given the recovery in house prices, Nama is set to return a profit of about €3 billion on this and other assets sold.

It would have been open to the Government to “buy” the land from Nama to use for housing, but no such joined-up thinking occurred.

The majority of development land, however, is in private hands, and its private owners are profiting from the boom in house prices. Proximity to cities, and availability of essential services such as sewerage, water supply, roads and public transport add to land’s value.

As zoning and services are provided by the public sector, it would seem appropriate that a significant part of the increased value that they confer on development land should accrue to the State.

There are a number of ways of dealing with this issue, none of which involves Canute-like attempts to directly control prices.

Increasing the supply of land zoned for development would certainly cut its price. Simplifying and clarifying the planning process would also help. There is currently huge uncertainty about what will be acceptable to planners, and this uncertainty raises costs and inhibits supply.

There is also evidence of land hoarding in expectation of even higher prices in future. If Budget 2018 brought in an appropriate tax on such land, this would incentivise owners to make it available for building now.

Property taxes are, in principle, based on market values but valuations have been frozen, and this is a hugely politically sensitive area.

Higher property taxes, with the extra proceeds diverted to fund housing, would incentivise better utilisation of existing property and raise cash to tackle the housing crisis. Thus those with homes would contribute to solving the problem for those who have none.