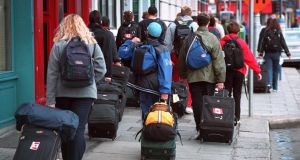 Airbnb has close to 7,000 rentals available in Dublin, of which roughly half allow rental of the entire property. Photograph: Dara Mac Dónaill

There is a rumour doing the rounds that Airbnb shot JR, and possibly JFK too. Thierry Henry’s handball that kept Ireland out of the 2010 World Cup in South Africa? It wasn’t his idea. Airbnb gave him a free duplex in Cape Town to do it. And if you whisper Airbnb three times while looking into a mirror, a housing crisis appears.

It has become fashionable recently for some policymakers and businesses to blame the short-term accommodation rental site for every societal and economic ill imaginable, despite an apparent lack of evidence.

Some Dublin City councillors, such as the Green Party’s Patrick Costello, and TDs such as Sinn Féin’s Eoin Ó Broin and former Fine Gael minister Fergus O’Dowd blame Airbnb for the housing shortage in Dublin and, by extension, increasing homelessness. The available figures don’t seem to stand this up, however.

In a delicious twist of irony, local businesses in the Kerry tourist town of Dingle recently even blamed the preponderance of Airbnb listings for a lack of available accommodation for seasonal staff, which they told the Kerryman newspaper was contributing to a decline in restaurants in the town.

Not a word about the fact that the town is so busy partly because Airbnb has brought in waves of independent tourists. Or that Dingle has scores of holiday homes lying idle which nobody appears to use. The Kerryman also notes that no social housing has been built in Dingle for eight years. That, surely, has had a greater impact on the shortage.

Around the world, from New York, where discommoded hoteliers (also known as the competition) are lobbying politicians for a further clampdown, to Italy, where it has been accused of turning the country into a “theme park”, Airbnb is in the dog house.

The website is the hulking and increasingly dominant $30 billion elephant in the bath of the short-term rentals market. It acts in the interest of its shareholders, and it doesn’t mind pressuring politicians to get its way. It has lobbied Irish politicians 38 times over the last 18 months, according to the lobbying register, including private meetings between its chief financial officer and former minister for finance Michael Noonan.

Airbnb is perfectly capable of minding itself. But let’s keep a sense of perspective here. It doesn’t mug little old ladies and it didn’t create the Irish housing crisis. We achieved that all by ourselves.

Airbnb has close to 7,000 rentals available in Dublin, of which roughly half allow rental of the entire property. But that doesn’t mean that about 3,500 houses have been taken out of the private rental market. I rented an entire apartment on Airbnb in Paris at the European Championship last summer. But the guy who lives in it told me he shacks up with his neighbour down the hall, who gets a cut when he gets a booking for the whole place.

Focus Ireland’s Mike Keegan estimated that about 450 private dwellings have been taken out of the rental market by Airbnb. But the best indicator is probably the 550 Dublin homes that Airbnb told the committee were rented last year for more than 120 nights. Those properties might otherwise be on the rental market.

Yet a good chunk of those properties are in prime city locations such as Temple Bar. How many homeless people would be queuing up to rent a penthouse on Crown Alley, if only the property wasn’t listed in Airbnb?

Housing and planning economist Ronan Lyons told the committee that Dublin Airbnb rentals were being driven by the current acute shortage in the hotel market, which will ease when the hotels currently in planning get built over coming years.

Lyons said the 15,000-20,000 empty properties around Dublin, a huge vacancy rate of about 10 per cent, are a much bigger contributor to the shortage in the city.

Policymakers should bring in a sensible and fair regulatory system for platforms such as Airbnb, covering issues such as standards and outlets for neighbours to complain. And then just let the company get on with it.

The real reason there is a housing shortage in this State is because we have a broken planning system and, for decades, there has also been an inherently ideological resistance in the Irish body politic to a mass public building programme.

We need 40,000 new houses per year to solve this issue and the private sector isn’t yet capable of delivering them. Stop scapegoating web companies, and start building.

Media Central, which is owned by O’Brien’s friend and fellow Frontline Defenders director Jim Conway, is the outsourcing provider of advertising sales to Communicorp. When it won a contract from the radio group in recent months, many staff switched over from the group’s Communicorp One to Media Central.

Three of the most senior former Communicorp One advertising staff are now leaving. Maria McKenzie, the former director of advertising who began her career at O’Brien’s beloved 98FM, will leave at the end of the month. Head of sponsorship Frank Dillon is also on his way out the door. They will be joined by head of solutions and insights Deborah Carpenter.

Meanwhile, Communicorp is expected to continue its lobbying campaign against the prospect of the Broadcasting Authority of Ireland issuing new FM new radio licences in a market where the incumbents struggle to make money. It is hard to argue against O’Brien’s logic on that one.

The boom really must be back. We have found a winner for the most Tigerish job title in the land, and it resides at majority State-owned AIB.

Among the speakers at a marketing conference in the National Concert Hall later this month will be Mark Brennan, the bank’s “head of key moments”.

No offence to Brennan, who didn’t create the title. But what on Earth is a head of key moments? It is a new role, which was established in May. The recruitment ad says it revolves around marketing AIB to customers at the “key moments” in their lives: presumably when buying their first house, first car, etc.

It is essentially a brand manager’s role. So why not call it that? Marketers, bloody hell. When the time comes, they will be the first against the wall (after the accountants, the solicitors, the insurance underwriters and, probably, the journalists).