House prices to rise for up to 10 years, property report says 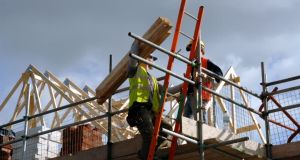 The Daft.ie report found that house prices in Ireland have risen more in the first six months of 2017 than in the whole of last year

House prices will continue to rise for the next five to 10 years unless drastic action is taken, a report released on Friday by property website Daft.ie has warned.

Daft.ie economist Ronan Lyons said that we are unlikely to see a stabilisation of prices in Ireland’s property market and that prices in Dublin will continue to drift upwards at a faster rate than the rest of the country. This was because “we’ve regulated ourselves out of the volume of homes that are needed,” he said.

The warning comes as the Government has ordered an investigation into the cost of building homes across Europe because it does not accept claims from construction groups that developers need more State money to help solve the housing crisis.

Ministers intend to use the benchmarking-style exercise to challenge claims by developers that they need further incentives from the Government to build houses and use it as evidence for future policy.

Minister for Finance Paschal Donohoe has told colleagues that he does not accept claims from builders’ groups that they cannot afford to build homes and apartments, particularly apartments around Dublin.

He has questioned the credibility of such claims at a time when house and rental prices are rapidly rising.

The Daft.ie report found that house prices in Ireland have risen more in the first six months of 2017 than in the whole of last year. In June the average list price of a house was 8.8 per cent higher than in December, while compared to the first quarter of this year, house prices in April, May and June have risen by 4.3 per cent.

According to Mr Lyons, Dublin does not necessarily need any more three-bedroom semi-detached properties but the properties it does need, like apartments, are the most difficult to build and the most heavily regulated.

He said the high cost of construction will continue to scupper the provision of new properties unless the new Minister for Housing focuses on reducing those costs.

Groups such as the Construction Industry Federation have consistently lobbied for budgetary measures, such as incentives and VAT cuts, because they say it is not financially attractive to build on a large scale.

Mr Donohoe and other senior Ministers have rejected this argument and will compare the construction industry costs from across Europe to Ireland.

It is likely to mean that Mr Donohoe’s first budget as Minister for Finance will not contain any further incentives for builders. However, there may be changes to building regulations in separate policy moves from Minister for Housing Eoghan Murphy.

Mr Donohoe told The Irish Times that the review is intended to look at what “genuinely are the cost differences between delivering a unit of housing or an apartment here in Ireland versus other jurisdictions”.

Government figures have been sceptical of industry claims that it is unaffordable for builders to build homes.

The assessment of building costs was initially set up by former taoiseach Enda Kenny but it will now feed into the review of the Government’s flagship housing policy document, Rebuilding Ireland, ordered by Taoiseach Leo Varadkar. The review by Mr Murphy is expected to be completed before the October budget.

Mr Donohoe was asked about building costs by Mayo Senator Paddy Burke at a meeting of the Fine Gael parliamentary party this week. Mr Burke said it was too costly to even build a standalone house in Ireland and asked if there are measures that could be taken to bring costs down, such as loosening regulations or decreasing some taxes.

Mr Donohoe told Mr Burke about the assessment of building costs across Europe, which will be completed during the summer.