Longford house prices rise the most as Dublin remains most expensive 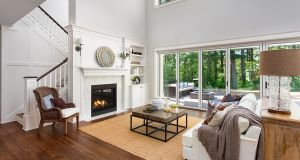 The most expensive 5 bed property in the state is in Dublin 4 at €1.2 million on average while Roscommon is the cheapest at €182,000. (Photograph: iStock)

A report by property website Daft.ie details the fact that house prices in Ireland have increased more in the first six months of this year than in the entirety of 2016.

Additionally, the report breaks down nationwide prices to show where value can be found from a one bed apartment up to a five bed detached property.

The most expensive property you can buy in the state is a five bedroom detached property in Dublin 4. There the average list price is €1.29 million, an increase of 7.7 per cent on the same period last year. If that price is out of your reach but you’re set on a 5 bed, you can pick one up for €472,000 in Dublin 10. Dublin was the most expensive location across all property types with one exception - you can pick up a 1 bed apartment in Dublin 10 for €3,000 cheaper than Wicklow.

Indeed, if you’re happy to move out of Dublin, the cheapest county for a 5 bed detached house is Roscommon where the average price is €182,000. Roscommon, as it happens, is the cheapest place for properties across all property types. A one bed apartment will cost roughly €41,000 while a three bedroom semi-d will set you back around €81,000.

In the provincial battle, when Dublin is excluded, Leinster had both the most expensive properties and saw the most significant annual change. In Longford the price of a 5 bed detached property and a 2 bed terraced property saw the biggest percentage increase in this survey, both jumping by over 32 per cent.

It was Wicklow, however, that had the most expensive properties ranging from €119,000 for a single bedroom apartment to €511,000 for a five bedroom detached property.

Connacht, which saw the largest percentage increases in the last survey, saw relatively significant price rises in the 2 bed terraced house category with prices in Co Galway rising by 19.8 per cent to €75,000. The most expensive Connacht property was, again, a five bedroom detached house in Co Galway where the average cost was €245,000.

But, it was Sligo that recorded significant increases in prices with a 2 bed terraced house increasing in price by over 24 per cent to €67,000.

Munster and Ulster were the steadiest provinces in this survey with prices on a county-by county basis in the latter ranging by as much as €29,000. Donegal, Cavan and Monaghan were fairly evenly matched with a 3 bed semi-d costing between €93,000 and €199,000.

Back to Munster where Co Cork saw the most expensive homes while Co Limerick saw the largest percentage increase. €304,000 was the average asking price for a five bedroom detached house in Cork, followed by €295,000 in Waterford. Compared to the last survey, prices for a 2 bed terraced house in Limerick increased by over 17 per cent to average €75,000. While Limerick saw increases, it was still the cheapest county in the region, tieing in some categories with Tipperary.

1 Life as a Facebook moderator: ‘People are awful. This is what my job has taught me’
2 Suspicions rife as key Brexit trade talks begin in Brussels
3 Irish companies restrict travel over coronavirus fears
4 Flight attendant seeks High Court injunction against Aer Lingus
5 Corona beer firm reeling after 8% slide due to coronavirus
6 We have little chance of building enough homes to meet election promises
7 Coronovirus panic sweeps through global markets
8 ‘The only time apartments were viable was in . . . Ballsbridge, Killiney and Dalkey’
9 Pharma giant AbbVie warned Government against ‘unfair’ €572m tax bill
10 How to turn racists’ genetic arguments against them
Real news has value SUBSCRIBE