Bookmaker GVC in talks to buy Ladbrokes for up to €4.42bn

Two parties are in ‘detailed talks’ over deal, they say 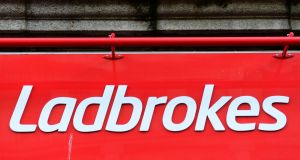 Bookmaker GVC Holdings has offered to buy Ladbrokes Coral for up to £3.9 billion (€4.42 billion) to create a betting giant able to cope with the tougher rules being imposed by the British government.

A merger would leave Paddy Power Betfair facing a larger rival with businesses in Britain and conintental Europe, where the Irish giant also operates, and also in markets such as on-line casino games. Paddy Power already competes directly with Ladbrokes Coral in the Irish and British both online and in physical bookmaker outlets.

In a joint statement the two groups said they were in detailed talks over a deal that would give Ladbrokes Coral shareholders around 46.5 per cent of the combined group, with GVC shareholders holding the rest.

The Isle of Man-based GVC, which has grown rapidly into one of Britain’s biggest online gambling companies, and high street-based Ladbrokes held talks about a deal earlier this year but they broke down without agreement.

On Thursday they said GVC had made a non-binding cash and shares offer to Ladbrokes, with the final price determined by the outcome of the government’s review into gambling machines in UK betting shops, which could hit profits at the target company.

Analysts and executives had expected the government review to spark a new round of consolidation in an industry that has been marked by near constant dealmaking.

The offer values Ladbrokes Coral at 160.9 pence per share, equating to a total equity value of around £3.1 billion, plus a contingent fee of up to 42.8 pence a share depending on the outcome of the government review.

Shares in Ladbrokes Coral closed Wednesday at 135.7 pence, giving a market capitalisation of £2.61 billion. GVC closed at 909 pence, valuing it at £2.77 billion.