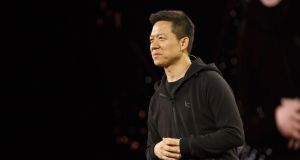 Billioniare Jia Yueting said he must remain in the US to work on electric car startup Faraday Future. Photograph: Bloomberg

Chinese internet entrepreneur Jia Yueting has defied orders from regulators to return home and help a listed technology company he founded resolve crushing debt, saying he needed to stay in the United States to work on his electric car start-up.

In his first official response to the directive from China’s securities regulator, Mr Jia said via his official Weibo social media account that he needed to oversee Faraday Future. His brother Jia Yuemin and wife Gan Wei have been empowered to handle affairs with the Shenzhen-listed firm, Leshi Internet Information and Technology.

The outspoken founder of Leshi expanded aggressively from the Netflix-like service into smartphones and automobiles before coming under increased criticism from authorities.

The China Securities Regulatory Commission issued an order in December for him to return by the end of 2017, saying Mr Jia and his sister failed to provide loans to Leshi as promised. The Shenzhen Stock Exchange last week also censured Mr Jia for reneging on that pledge.

Now Leshi and LeEco, the closely held tech giant he helped create, are struggling to pay suppliers and lenders, which has led to Chinese courts seizing and freezing his assets. Mr Jia said in his Weibo post he would work with Leshi to resolve its issues and apologised for his companies’ debt crisis.