Caveat: Mathews always stood out from gang of business pundits elected in 2011 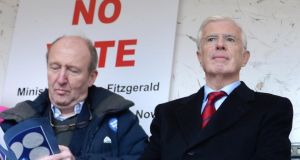 At the funeral on Friday morning in Donnybrook of the former Fine Gael TD Peter Mathews, his passing will be mourned by his loving family, colleagues and friends. A decent man, they are sure to cherish his memory.

Mathews will also live long in the memory of many Irish journalists. The loquacious former banking consultant, with his very own line in bombastic bonhomie, wasn’t the sort of chap you would easily forget.

As he rose to prominence in 2009 with criticism of government during the financial crisis, business journalists were the first among the media to encounter him. Long before he built his national profile as a pundit on Vincent Browne’s TV3 show, Mathews was hammering the phones of business reporters for long (always long) but usually entertaining and enlightening discussions about the state of the banking system.

Six years ago last week, he was among a crop of business figures who ran for the Dáil on an economy ticket, most of them new to electoral politics. Others included former McKinsey consultant Stephen Donnelly; financial markets pundit Paul Sommerville; hippy builder Mick Wallace; and the then-veteran senator and business writer (and now Minister) Shane Ross.

The recovery may have dulled people’s memories somewhat, but the 2011 campaign will be recalled as an extraordinary and fearful affair: surely the only election during which bondholders and bank capitalisations formed the basis of barstool conversations up and down the land.

Ireland was bonkers with banking banter. But this was Mathews’s forte. I tailed him one stormy evening as he canvassed housing estates in Leopardstown, south Dublin, with a small army of volunteers and family members. His energy was infectious as he lowered his head and sprinted from door to door in the face of a howling gale and horizontal rain.

I remember looking at one of his election leaflets, which had his Bankermathews.com website address splashed across it, and wondering if he knew what he was doing in politics at all.

It turns out he did. At one doorstep, a woman asked Mathews why he thought he could do better than the TDs of the outgoing government. “Nobody in the country knows as much about this banking crisis as I do,” he replied, without a flicker of self doubt.

The next householder accosted him to deliver a long diatribe about the European Union’s supposed interference in the dosages of vitamin C tablets. Mathews, who was more used to doing the talking, tried his best to politely deflect.

A couple of days later, it emerged Mathews had sent Valentine’s Day gifts of edible roses to some of the best-known female broadcasters and journalists in the State. A career politician might have struggled to get away with that little beaut but, coming from Mathews, it somehow seemed endearing.

When the polls closed, he had sneaked over the line as the third Fine Gael seat in his constituency. But his relationship with the party (and some voters) later soured over his opposition to abortion legislation, and he was treated roughly.

As we appear to be nearing yet another general election, what of the rest of the the Class of 2011 – the gang of business figures turned candidates who ran to change the State that year?

Ross is – for a few more months at least – experiencing the difference between hurling on the ditch and the pitch. It is hard to see him still in Government after the next election, which could be imminent, but it’s impossible to write him off.

Donnelly, who has built an impressive power base in north Wicklow, is no longer an anti-politician and is now simply a consummate politician. His recent switch to an ascendant Fianna Fáil demonstrates that. I’d bet my last bacon fry that he will become the next member of the Class of 2011 to make cabinet.

Wallace has, through the thick and thin of his financial travails, managed to cling on in Wexford. His dogged pursuit of malpractice within the Garda and issues surrounding the sale of Nama portfolios should be enough to warrant his re-election.

Sommerville fell short of a Dáil seat in 2011 and now runs a financial practice, Sommerville Advisory Markets. It specialises in promoting spread-betting and other complicated products . He still pops up now and again as a pundit on radio, but his political race appears to be run.

While Mathews may have had his flaws and idiosyncrasies, I always tended to have the highest regard for him among that group of business figures turned 2011 election candidates.

He was committed and open and honest, even when this was utterly inconvenient for him.

And his legendary stubbornness also seemed, to me, admirable.