Champagne is in, CDs are out: how the CSO basket reflects changing Ireland

Statistics body once counted pressure cookers and kippers - but no more 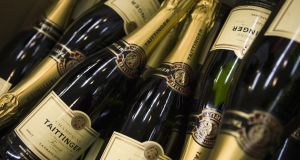 Champagne disappeared from the CPI in 2012 – but it’s back in now. Photograph: Getty Images

Measuring the average level of prices back then was a more straightforward business. People spent more of their disposable income on food and drink – and in a much less complicated way.

The Central Statistics Office has for many years used a basket of goods to measure the price level in the economy – the Consumer Price Index – and how it changes. Back then, the key measures were a stone of potatoes, a pound of steak, a loaf of bread, a pound of sugar, a quart of milk and a dozen eggs.

Leisure spending in those days rarely went beyond a pint of stout or 20 cigarettes.

Now the world is more complicated. Among the products added to the “basket” – now containing 616 items – in the latest reshuffle are fresh hake, avocado, melons and sweet potatoes. Their inclusion in the basket from January reflects changed spending patterns. These goods have been on the shelves for many years, of course, but are only now popular enough to merit inclusion when judging the overall measure of consumer price inflation.

The headlines, unsurprisingly, were grabbed by the return of the bottle of champagne. Bubbly had disappeared from the index in 2012, along with fine quality wines, as spending on such items collapsed in the wake of the economic crisis.

Now, the recovery has boosted spending to the extent that it has come back into the basket, joined by take-home bottles of craft beer, electronic cigarette refills and liquids, and products for pets. Ireland is getting posher again.

Elsewhere televisions are getting bigger – there is now a specific category for TVs with screens in excess of 40ins – and bags of potatoes are getting smaller, with the 10kg bag replaced by the 7.5kg version, presumably a reflection of our recent habit of shopping more often during the week.

Why stockbrokers’ fees and children’s dry haircuts are now making an appearance is anyone’s guess. But that’s the thing about statistics. The basket is based on a survey of household budgets across the State. It reflects what people are spending money on – no more, no less – with the only latitude for the CSO being in how it defines the particular products and the categories they are in. Women’s trainers are now in the basket not because of any move to statistical equality or a vague idea that women are more sporty, but simply because enough money is now spent on them to justify inclusion as a separate category.

Two areas perhaps define our changing economy and households best. The first is food, specifically meat, as we have gradually moved away from the traditional Sunday “roast” and the cheaper cuts. Among the products dropped as far back as 2002 were pot roast, rib steak, neck of lamb and leg of pork. Streaky rashers bit the dust in 2007 to be followed by loin of pork and collar of bacon in 2012 – both of which had only entered into the basket in the first place in 2002. In fish, plaice and whiting fillets have fallen out of the net in the latest review, replaced by fresh hake. Smoked kippers are long gone, with this one-time breakfast stable dropped in 2002.

And cooking methods are changing too, with the pressure cooker, still present in many Irish kitchens, losing out the same year. The deep fat fryer held on until the latest update, but has now gone the way of the pressure cooker, the sewing machine, the clothes line and the “ladies’ perm”.

But change is nowhere faster than in technology and appliances. In the old days, many households rented their TVs and bought appliances from the ESB. By 2002, both these categories were gone from the index and the DVD player and computer games console had entered the fray. By 2007, DVD players were also recording and were joined by camcorders and digital cameras.Walkmans were replaced the same year by MP3 players.

By 2012, the MP3 players were in turn replaced by the MP4 and these were joined by tablets, media downloads, computer software and smart TVs.

In the latest update, CDs, MP4 docking stations and camcorders have all bitten the dust, along with the clock radio and “photo development”.

Everything is now mobile and digital – people are woken up by their phones, play music on them and have little need for the services of a photo developer, except perhaps when graduating or getting married.

Meanwhile TVs are even bigger and “smarter”, leading to the abolition of a separate category for smart TVs and a gradual increase in the size of screen, moving from an era when many watched small portable screens to the monsters of today.

Other comings and goings are harder to explain. The chopping board marched into the basket in 2002 but has now fallen out. And can we really do with fewer lead pencils, trouser alterations and carving knives – all now excluded along with the lamb gigot chop and library charges? The fact is we obviously can. Instead we are now well-off enough to buy single items of cutlery, copious amounts of candles, security services and ereaders, along with the services of medical analysis laboratories and X-ray centres.

The old saying talks about “lies, damned lies and statistics”. But this is much more straightforward stuff, with little room for argument. The CSO looks at what we buy and at what it costs. And if the fresh hake costs a few euro more than the fillet of plaice, or the 40-inch TV and satellite services cost a packet, then that is our decision. The CPI is no more than the best estimate of the sum of where we all spend our money.