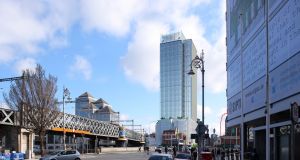 After taking two years to secure planning permission for his Tara Street tower, it appears to be a case of full steam ahead for developer Johnny Ronan. With construction of Dublin’s tallest building expected to get under way imminently, The Irish Times understands that Ronan Group Real Estate (RGRE) has already instructed Dan O’Connor of JLL’s hotel and hospitality division to secure a major hotel operator for the scheme.

Under the terms of its existing planning permission, the proposed 22-storey building will include a 106-bedroom hotel extending to 4,455sq m (47,953sq ft) across floors one to four.

The office element of the permitted scheme meanwhile covers 10,361sq m (111,524sq ft) distributed from the fifth to the 20th floor. The overall development is set to be complemented by a rooftop restaurant and bar.

This configuration could yet become the subject of a further planning application however, judging by the typical requirements of the international hotel companies which are understood to have expressed an interest in the Tara Street tower.

A source familiar with the matter said many of these major international hotel operators look for properties with the capacity to provide up to 300 guest rooms.

While it is understood that Standard Hotels, Hoxton, Ace, and the Dream Hotel Group are among the parties eyeing up the Tara Street tower as a potential Dublin location, it’s the presence of billionaire aviation boss Richard Branson’s Virgin Hotels on the list that will likely attract the most attention.

Having opened its first hotel in Chicago in 2015, Virgin Hotels is currently engaged in an ambitious drive to expand to cities across the US, South America and in Europe.

Virgin’s first hotel outside of the US is scheduled to open for business in the Scottish capital of Edinburgh in 2020.