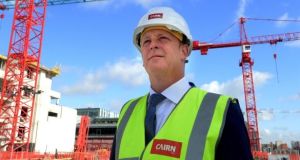 This compares to remuneration of €797,000 in 2017 and comes despite the home builder losing 43 per cent of its share value last year.

Chief financial officer Tim Kenny, who joined the company as successor to Eamonn O’Kennedy in August 2017, received remuneration of €770,000 for last year, which included a €285,000 bonus.

The report states that Mr Kenny’s salary was increased by 5 per cent on January 1st this year, “marginally below” the rise awarded to the “wider workforce”.

In addition, Mr Kenny has been awarded 646,507 shares under a long-term incentive scheme. These were awarded at €1.76 or €1.77 a share, while Cairn’s share are currently trading around €1.35 in Dublin.

Cairn, which was founded by Mr Stanley, his brother Kevin Stanley and serial entrepreneur Alan McIntosh, paid out a combined €1.9 million in remuneration to senior executives last year, against €2.2 million a year earlier.

The report also states that Cairn paid stockbrokers Goodbody an additional once-off fee of €500,000 for work on a refinancing last year. This was in addition to the €50,000 fee paid for providing services as Cairn’s corporate broker.

These disclosures were required as the company appointed Linda Hickey, a former head of corporate broking at Goodbody, to its board in April 2019.

The report also states how the board of Cairn is approaching succession planning. This involved a review of other senior management roles below board level to identify “suitable individuals” capable of filling senior managerial positions on a medium- and long-term basis, whilst ensuring their development needs are “identified and addressed”.

As part of their development, managers below board level “consistently undergo talent assessment and development coaching” and are also invited to attend part of a board meeting to present on their specialist area.

“This will allow the board to develop a clear insight into the quality of the talent pipeline in the organisation and provide the individual with a greater understanding of the workings of the board,” the report states.

The board also receives “regular updates” from its human resources unit on a “significant number” of employees below board level, evaluating their performance and “potential growth for broader roles across the company”.

Cairn became the first Irish home builder to float on the stock market since McInerney Holdings in 1997, when it listed in 2015. Its share price has rallied by more than 30 per cent from its late December lows, helped in part by the prospect of sizable cash returns to investors. It is due to pay an interim dividend to shareholders in September

Cairn, which builds and sells houses and apartments mainly in the greater Dublin area, earned pre-tax profits of €41.5 million in 2018. Revenue rose 125 per cent to €337 million last year.