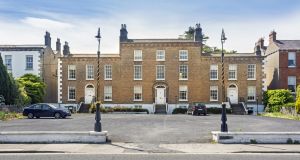 Three period houses on a site of 0.66 acres with permission for three mews houses on Dartry Road in Dublin 6 are on the market for €5.25 million through agent Gareth Noone of DNG.

These range in size from 285sq m (3,067sq ft) to 412sq m (4,435sq ft) and the permission allows for the division of their large front gardens (currently used for open-plan car-parking).

The Victorian-era houses have southwest-facing rear gardens and are two- and three-storey over garden level.

There is also permission for three mews dwellings to the rear – all 176sq m (1,894sq ft) – designed by architects de Blacam and Meagher. Access to the rear mews scheme is from a private laneway which forms part of the property.

The properties are between the villages of Milltown and Rathgar. Palmerston Park and Dodder Linear Park are within walking distance, as is the Luas at Milltown.

The houses at 14-16 Dartry Road were previously rented out as pre-63 accommodation that included six one-bed units, six two-beds and one three-bed. The combined front gardens could accommodate up to 40 cars.