Steven McKenna to take over as Sherry FitzGerald CEO in July 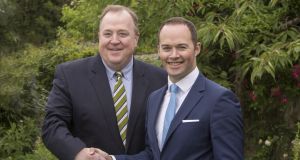 He will succeed the company’s co-founder Mark FitzGerald as CEO. Mr FitzGerald, who owns 40 per cent of the business, has held the role for the past 35 years and will continue as the company’s non-executive chairman.

He has worked closely with Mr FitzGerald and the company’s senior management team in re-positioning the business post the economic crash in 2008.

This has involved expanding its network of franchisees, mostly outside the Dublin area, opening more company-owned branches and rebranding its commercial business under the brand of global player Cushman & Wakefield.

Like all Irish estate agents, Sherry FitzGerald retrenched in the recession. Group staff numbers reduced to 200 with about 150 people employed by its franchisees around the country.

Today, the group number has increased to 388, with the headcount at its franchisees around 300.

The group’s turnover has more than doubled in the past five years, from €16.3 million for 2010 to €37.3 million last year, as the Irish economy rebounded to become the fastest growing in the euro zone.

Commenting on the choice of Mr McKenna as his replacement, Mr FitzGerald said: “Steven is a great appointment as he has that unique balance of strategic, execution, and people skills. He is also smart, calm, clear, and a really decent person.”

Having never worked in the industry before, Mr McKenna “came in at the deep end and rolled up his sleeves” to help the business restructure and grow again, Mr FitzGerald said.

Mr FitzGerald said there was plenty of scope for Mr McKenna to grow the business and the brand further in the years ahead. “The business is in good hands.”

Mr McKenna, who hails from Galway, trained and qualified as a chartered certified accountant with EY, and holds a masters in business practice from UCC. He is married with two children.

In relation to the current housing crisis here, Mr FitzGerald, a son of former taoiseach Garret FitzGerald, said there needed to be a “greater equilibrium” between supply and demand but noted that few major cities in the world “seem to be getting it right”.

Sherry FitzGerald is the biggest player in the Irish residential market. It sells about 7,000 homes in Ireland each year and has a 15 per cent share of the market.

Join the illumi-natty: A flashing face mask will keep you safe and stylish 10:28
China orders Jack Ma’s Ant to revamp business 10:24
Covid-19 has changed the office for good 10:19
European shares pause near record high with eyes on US inflation data 08:18
Just Eat Takeaway says Q1 orders up 79% to 200m 07:49

5 Covid-19 has changed the office for good