The worst places in Ireland to invest in property

Ranelagh - it’s the most expensive place to buy a house in Ireland, but it’s also the worst for investment yields. So where is the best? 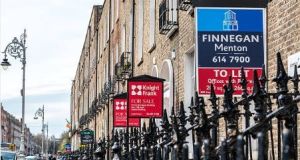 Like everything from rents, to property prices to the availability of tenants, yields, too, can differ right across the country. So, based on current rental yields, which are the best places to invest around the country – and the worst? File photograph: iStockPhoto

If you’re a property investor, you’re likely to be interested in a number of things – capital appreciation, low maintenance costs, a good flow of tenants and the rental yield your property will generate.

Rental yield is a simple metric used by investors to calculate their potential return on a property, by working out how much cash an asset produces every year as a percentage of its value.

Like everything from rents, to property prices to the availability of tenants, yields, too, can differ right across the country. So, based on current rental yields, which are the best places to invest around the country – and the worst?

The worst places to invest

It boasted the country’s most expensive houses in the most recent Central Statistics Office figures. And when it comes to rental yields, which are calculated by us based on average house prices from the CSO, and annual rent figures from Daft.ie, it’s also the country’s worst place to invest.

With an average sale price of €706,741 in April, Dublin 6 – which incorporates Ranelagh, Rathmines and Rathgar – has the country’s lowest rental yield of just 3.6 per cent, followed by Dublin 4 (Ballsbridge, Donnybrook), at 3.9 per cent.

Within Dublin, there is a close correlation between the ritziest suburbs – and therefore the highest house prices – and the lowest rental yields, with houses being sold at a higher multiple than what they can be rented for than in other parts of the city.

In Dublin 6, for example, the rent on a three-bed house is just 39 per cent higher at €2,092 than rent on a similar property in Dublin 10 (€1,507), but the average sale price in Ranelagh is more than three times the price of the average property in Ballyfermot.

This follows through with figures from Daft.ie which show that it’s cheaper to rent a three-bed in Dublin 6 than it is to buy. In Dublin 10, on the other hand, servicing a mortgage is almost half the cost of renting a property.

Across the country, cities and regions that have benefited most from a price recovery in recent years are producing the lowest yields. However, as noted below, Ireland in general is still performing better than many countries across Europe, with the lowest Irish yield on a par with UK averages, for example.

The best places to invest

In Dublin, the best places to invest are those where the growth in rents has outpaced the growth in property prices. As mentioned, Dublin 10, which includes Ballyfermot and Cherry Orchard, is producing the highest rental yields in the country, at 10.4 per cent,according to the survey, followed by the north of the city centre (9.4%) and Dublin 2, incorporating developments along the south quays (7.6%).

Consider Dublin 2, which has an average sale price of €361,552 – but Ires Reit currently has two-bed apartments on sale in The Marker in Grand Canal Dock for €2,840 a month, which would give an indicative yield of 9.4 per cent.

Outside of Dublin, rising prices are starting to squeeze yields, although there are still attractive numbers on offer.

Longford is the best performer, with a yield of 7.7 per cent, while Roscommon is also attractive at 7 per cent.

With average house prices of less than €100,000 in these two counties, investors can achieve rents of €571 in Longford or €577 a month in Roscommon.

Of course, when looking in less populated areas, the ability to attract and retain tenants will be a concern that can affect the investor’s ability to achieve the touted yield.

This should be less of an issue in both Limerick and Waterford cities, which, thanks to low purchase prices - lower in fact than in their respective counties - and attractive rents, of €893 in Limerick city for example, investors can avail of high yields and a good market for renting.

It’s not just about location

Yields also come down to property type. According to Daft.ie research, across Dublin, yields on a one-bed property will typically outperform that on a two-bed, with five-bed properties producing the worst yield.

Consider for example Dublin 22, which includes Clondalkin. Investors can achieve a yield of 11.3 per cent on a one-bed property in the area – but just 4.7 per cent on a five-bed house.

How do we compare internationally?

Last November, a survey from FX provider World First found that Ireland had the highest rental yield for buy-to-let property in Europe at 6.54 per cent, as it moved from 10th place to top of the league table. It was followed by the Netherlands (6.35%); Portugal (6.33%); and Belgium (6.32%).

The survey also found that Ireland was the second most expensive country to rent in Europe after Luxembourg, while purchasing a property in Ireland was in line with European norms.

“Yields are attractive on a gross basis,” he says, but adds that investors need to do their sums on what expenses they can expect to consider net yields also. “The net yield is what you’re getting so can you afford to ignore it?”

Indeed investors might be surprised. Typically, he suggests that rental yield of 6-8 per cent gross equates to a net yield of as little as 1-2 per cent.

He gives the example of a one-bed apartment in the Sandymount, south Dublin area, which was acquired for about €325,000. Based on a rental assumption of €1,610 a month, the yield on the property is of the order of about 6 per cent.

However, when costs such as income tax, letting fees and Residential Tenancies Board registration are factored in, the net yield actually drops to -0.6 per cent.

So the investment is more of a pure capital appreciation play, then one designed to produce a decent income.

It’s not just rental yields investors are interested in - capital appreciation can also turn a so-so investment into a stellar one. Property prices rose by about 10 per cent last year, and are forecast to rise by about 8 per cent this year.

And this is where yields can matter less. While Dún Laoghaire Rathdown may have one of the lower yields in the capital, at 4.2 per cent, average house prices have soared in the area by 40 per cent since the summer of 2012 for example.

In contrast, prices in Fingal, which includes Dublin 11, 13 and 15, have risen by just 18 per cent over the same period.

But with early signs that rental inflation is starting to slow at last – figures from the Residential Tenancies Board show rents in Dublin fell by 1.5 per cent in the first three months of the year – a squeeze may come on yields.

“With capital values appreciating at a higher rate yields will harden a little bit,” notes Harris.

Rental yield is a key metric investors use when assessing the potential of a particular property or location. It’s a measure of how much cash that asset produces every year, as a percentage of its value. So, for example, a property worth €200,000 producing a rental income of €10,000 a year has a rental yield of 5 per cent.

Typically, the measure is used on a gross basis – ie before expenses etc have been deducted, although it can also be done on a net basis. For the purposes of this article, the gross measure is used.

Another point to note is that when calculating the rental yield, investors will typically use the market value of the property, as opposed to the price they actually paid for it.

It’s important to remember that rental yield is just one indicator of how a buy-to-let investment might perform. Expenses, problematic tenants, maintenance costs, poor capital appreciation are other factors also need to be kept in mind.