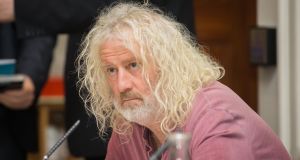 Independent TD Mick Wallace and his son Sasha will defend a bid by the liquidator of the politician’s property business to disqualify them from acting as company directors.

The liquidator appointed by US company Cerberus, Michael Leyden of Outlook Accountants, to the TD’s company, M&J Wallace, is set to ask the High Court to disqualify the two from acting as company directors for up to five years.

The matter was raised in the High Court on Monday. Both parties have a number of weeks to exchange affidavits and other documents and the case itself is timed to go ahead in October.

Mr Wallace confirmed after the hearing that he and his son intend to defend the action on the basis that the liquidator had no grounds on which to seek their disqualification.

For the last two years, Mr Wallace, has been highlighting Cerberus’s role in Project Eagle, Nama’s €1.6 billion sale of its Northern Ireland loans. Controversy over the deal sparked a number of investigations, including a criminal inquiry. It faces a further investigation by a commission led by retired judge, John Cooke, later this year.

Cerberus appointed Mr Leyden to M&J Wallace on foot of a €2 million judgement against the company. It acquired the firm’s debt from Ulster Bank. Mr Wallace has always maintained that he did not know that the US investor had bought his debt until after he first raised the Project Eagle issue in the Dáil in mid 2015.