Shanahan’s on the Green building sells well above €4.5m guide 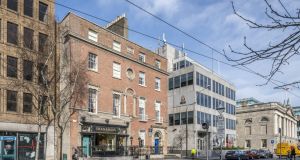 No 19 St Stephen’s Green was designed by Richard Cassells, the top Dublin architect of the Georgian era.

One of the finest Georgian houses on Dublin’s St Stephen’s Green, occupied by the fine dining restaurant Shanahan’s on the Green, is to be sold on behalf of a receiver for considerably more than its €4.5 million guide price.

The famous steak house at No 19 has been trading as Shanahan’s since 2000 and was previously known as Whites on the Green, when it was also run as a restaurant by property owner Peter White.

The lease has another seven years to run. Mr Shanahan was residing in Boston when he set up the exclusive 80-seater Dublin restaurant. He is now based in California and visits Dublin regularly, staying in an apartment on the top floor of the restaurant building.

The four-storey, over-basement block close to St Stephen’s Green Shopping Centre has an overall floor area of 600sq m (6,458sq ft), with the basement, ground and first floors in restaurant use.

The second floor accommodates an office and the third floor is used entirely as an apartment.

Colm Luddy of agent CBRE, who is selling the building on the instructions of Ken Tyrrell of PwC, said it would be premature to disclose the selling price, though he could say it was “significantly more than the guide”. The sale attracted “between 15 and 20 viewers, most of them wealthy private investors”.

No 19 St Stephen’s Green was designed by Richard Cassells, the top Dublin architect of the Georgian era, who was responsible for some of the largest and finest houses built in Ireland.

The pent-up demand for retail investments in Dublin’s south inner city has also led to a higher-than-expected price paid for a shop on Wicklow Street.

Stephen McCarthy of Savills had been guiding €1.75 million for the JD Sports outlet at 26 Wicklow Street, but ended up selling it to a private investor for more than €2 million.

The last retail investment sold on Wicklow Street was No 19, occupied by Cornucopia, a vegetarian restaurant, which was bought by a private investor for just over €2 million.