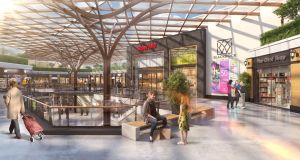 The owners of Blackrock Shopping Centre in south Dublin have secured planning for a €10 million upgrade of the property, which will include a major internal refurbishment and the addition of a new glazed roof.

Investment and pension firm Friends First said the work, which will commence in the second quarter of 2018 and take 12 months to complete, will also deliver additional retail space as well as a new facade and entrance off Frascati Road.

The company is also redeveloping the adjacent 70,000 sq ft office site at Enterprise House, which will house the offices of Zurich Insurance.

The centre is linked by a pedestrian connection from Blackrock village to the adjacent Frascati Shopping Centre, which is also being redeveloped, and is located on one of the busiest arterial routes in and out of Dublin city centre.

One of the signature elements of the refurbishment will be a new roof covering, which will grow from the lower mall level. A new mall stairs and lift between the retail levels also aims to strengthen the pedestrian permeability from Frascati Road to Blackrock village.

Claire Solon, head of property in Friends First, said: “Along with the adjoining Enterprise House development, this project will reinforce Blackrock as a destination and form an integral link with the village.”

Oliver Nolan of Lafferty Architects, the lead designer, said : “Our design intention is to create a property of character appropriate to its prominent location between Frascati Road and Rock Hill/Blackrock village.

“The proposal creates a transition between these two competing environments and provides a visual, cultural, social and environmental value to Blackrock village centre.”

Friend’s First, which had originally owned 33 per cent of the property through an investment fund, took full control of the remainder of the site in a deal thought to be worth about €50 million in 2014.