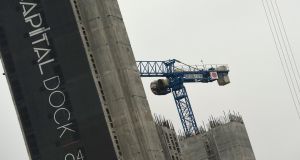 US property investment group Kennedy Wilson said on Monday that recruitment group Indeed is set to become the second major occupier to commit to the Capital Dock campus development in Dublin’s docklands.

The jobs website, which is set to grow its Irish workforce to 1,000 by 2019, will join US investment bank JP Morgan at the new development, which is being developed by Kennedy Wilson in a joint venture with Fairfax Financial Holdings and the National Asset Management Agency (Nama).

Indeed will enter into 20-year leases, with a break in year 13, for buildings 100 and 300 Capital Dock, extending to more than 216,000sq ft of prime office accommodation. Financial details were not disclosed for the Indeed deal, but it’s understood that JP Morgan is to pay about €125 million for its building – about €10,400 per sq m or €961 per sq ft.

“Growing our net operating income by delivering our development pipeline alongside asset management wins continues to be our focus,” said Mary Ricks, president and chief executive of Kennedy Wilson Europe, adding that the company will begin pre-marketing the 190 residential rental apartments at the development in the second quarter of 2018 .

Kennedy Wilson will have a portfolio of about 2,200 apartments in Dublin when Capital Dock, and the third phase of Clancy Quay, where it recently launched a range of apartments and townhouses starting at about €1,900 a month to rent for a two-bed, is completed. According to Ms Ricks, it plans to more than double its portfolio to 5,000 units in the “next few years”.

Capital Dock extends over 4.8 acres alongside Sir John Rogerson’s Quay in Dublin’s docklands, with over 690,000sq ft of new mixed-use space. That includes office space capable of accommodating more than 3,500 people, and 190 apartments with waterfront views. Kennedy Wilson said that the entire development is now on track to complete by the end of 2018.