Seán Dunne and ex-wife Gayle Killilea in conflict over finances 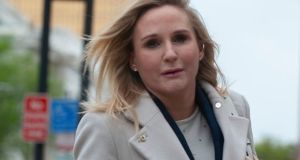 In an October 3rd letter, Mr Dunne’s lawyer suggested Ms Killilea misrepresented her assets in a recent financial affidavit by failing to show that she owes millions of euro to various entities, including more than €11 million to a trust for their children. Lawyer Luke McGrath called it “bizarre” that “one would seek to include assets and monies not owned or legally within one’s possession, custody and control” in the affidavit.

Ms Killilea’s lawyer, Peter Nolin, in a letter dated a week later, rejected Mr McGrath’s request for a copy of the confidential affidavit, saying his client had “recently divorced” him in England, leaving Mr Dunne with no legal right to the information. Mr Nolin dismissed Mr Dunne’s suggestion that Ms Killilea’s financial affidavit is inaccurate, saying he had provided “no factual basis” for the allegation.

The couple’s back-and-forth over money comes in the wake of a June jury verdict finding that Mr Dunne fraudulently conveyed assets to Ms Killilea to evade creditors and ordering her to surrender €18.1 million.

The letters came to light as attachments to a request from the bankruptcy trustee, who brought the case against the couple, to find Mr Dunne in contempt of court. Mr Dunne asserted in a court filing earlier this month that he earned only €200 per month, leaving him unable to pay a $9,330 (€8,398) sanction he had agreed earlier this year to pay the trustee for destroying and failing to preserve emails related to the case.

In the filing, the trustee rejected Mr Dunne’s assertion that he had no money, citing among other things his claim to certain overseas assets in his lawyer’s letter to Ms Killilea’s attorney. He noted that Mr Dunne had made hundreds of thousands of dollars and lived in luxury homes in the US and the UK since declaring bankruptcy and accused him of structuring his finances to make it appear he was broke.

“Since filing for bankruptcy, debtor has employed a literal army of attorneys, solicitors and other professionals in the United States and Ireland on his behalf,” the trustee’s filing reads “Clearly, he has the means available to him to pay.”

In his letter Mr Nolin dismissed Mr Dunne’s concerns for a trust to benefit the couple’s children, calling him “a bankrupt” with “no legal right to speak or represent the children in this action”.

“Ms Killilea will protect the interests of her children,” Mr Nolin wrote.

He further accused Mr Dunne of improperly seeking to insert himself into settlement negotiations, noting that funds potentially involved belonged to his client, not him. Mr Dunne’s lawyer’s letter, meanwhile, provided some insight into those negotiations, saying the trustee was seeking a settlement in excess of $30 million.