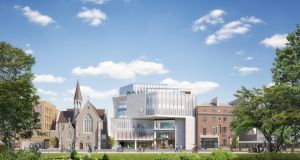 The Royal College of Surgeons Ireland (RCSI) has agreed a €40 million loan with the European Investment Bank (EIB) to part-fund the development of its city centre campus.

The €90 million redevelopment of a block in the Ardilaun Centre on St Stephen’s Green, which is subject to planning permission, will provide enhanced research, teaching, learning, faculty and student facilities. Cathal Kelly, RCSI chief executive, said the new building would also provide space for the local community.

“We are now setting out on what will be the most exciting and transformative phase of our journey so far. The opening of 26 York Street in 2018, also funded in part through a first €50 million loan provided by EIB, marked the beginning of an exciting campus expansion for RCSI, providing world-class simulation facilities for our students and trainees,” said Mr Kelly. “The redevelopment of Ardilaun Block A will further transform the way in which we educate our students so they can learn, grow and prepare to take their place as the medical leaders of the 21st century. It will also provide a space that engages and involves the local community and plays a dynamic role in the life of the city.”

The loan is the second made by the EIB to RCSI in three years. EIB vice-president Andrew McDowell said the investment was “visionary” and would be beneficial to both the RCSI and Ireland.

“Investment in research and education is crucial for Europe’s future. The European Investment Bank is pleased to support transformational new investment by RCSI, Ireland’s leading medical school, in the heart of Dublin,” he said.

“The visionary new investment by RCSI will further strengthen Ireland’s global role as a centre for medical learning and research, improve education for future generations of doctors, nurses, midwives and pharmacists and significantly reduce carbon emissions through energy efficient buildings.”