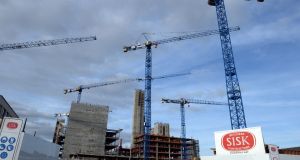 About €2.4 billion was invested in the Irish commercial property market in the nine months to September, according to figures from estate agent Cushman and Wakefield.

After a relatively strong first half of the year, the third quarter recorded turnover levels in excess of €786 million across 33 deals, it said.

The most notable transaction was the sale of Five Hanover Quay, Dublin 2. German fund manager Union Investment acquired the dockland office block for €197 million. The property is fully let, generating an annual rental income of about €8.8 million, Cushman and Wakefield said.

The next largest deal was the purchase of the Nova Atria office campus in Sandyford, Dublin 18. Singapore-based real-estate investment manager Mapletree Investments secured the office block for €165 million from US private-equity titan Blackstone.

The company said the third quarter also witnessed a “switch up in the asset class rankings” with office transactions returning to the top of the table ahead of residential transactions. It said office assets accounted for about €989.4 million or 41 per cent of total turnover in the nine months to September .

Residential assets remained “a very active feature in the Irish investment market”, totalling €638.2 million over the nine-month period. The top transaction in the quarter included a portfolio of classic residential properties in suburban Dublin labelled the Circle Collection. The portfolio was acquired by US investment manager Heitman Capital Partners for €52 million.

“Following the ECB’s cut to interest rates at the end of September, and signals that further rate cuts have not been ruled out, real-estate returns continue to look attractive to fund managers across Europe, with Dublin remaining as a key city,” Jonathan Hillyer of Cushman and Wakefield said.

“Lack of available investment opportunities across the continent remains a constraint in the marketplace which should see continued robust pricing at least in the short term,” he said.